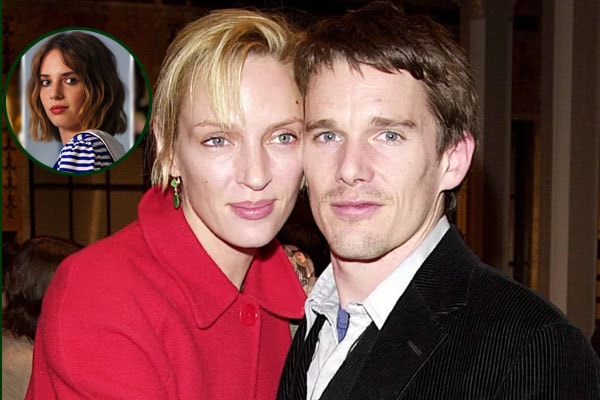 Maya Hawke, Uma Thurman‘s daughter together with her ex-husband Ethan Hawke was born on 8th of July 1998 in New York City, USA. Maya’s parents Uma and Ethan tied the wedding knot on May 1998, the same year the former couple welcomed their child, Maya. However, the exes settled their differences and got divorced in 2005.

Maya is not the only child of her mother Uma. She is the eldest of the ex pair’s two children which they shared during their five-year marriage. Maya’s younger brother’s name is Levon Roan Thurman-Hawke. Not only that but, Maya also has three half-siblings, Indiana Hawke, Clementine Jane Hawke, and Luna Thurman-Busson through her parents’ other marriages.

And looking at Maya’s Instagram handle, it looks like she is currently in a relationship with Gus Wenner, Rolling Stone founder Jann Wenner’s son.

Maya Hawke Was Born In The Family Of Actors

American actress and model Maya Ray Thurman Hawke was born on the 8th of July 1998 to her parents Ethan Hawke and Uma Thurman. However, she is not the only actor in her family. Maya’s father is an actor who is best known for landing big roles on movies including Explorers and Dead Poets Society. Moreover, Maya’s mother is also an actress known for her phenomenal performances in Pulp Fiction and the Kill Bill films.

Uma Thurman’s daughter Maya made her acting debut through BBC adaptation of Little Women as Jo March in 2017. And Ethan Hawke’s daughter’s recognizable role as Robin in the third season of the Netflix series Stranger Things led to increasing her fan following across the globe.

It wasn’t a coincidence that Maya’s parents met on the set of a movie, Gattaca in 1997. The former couple got married in the following year. Maya’s brother Levon was born in 2002.

From Maya’s father perspective, she is a great-great-grandniece of playwright Tennessee Williams. While through her mother’s side, she is the granddaughter of Buddhist scholar Robert A. F. Thurman and model Nena Von Schlebrügge. Schlebrügge’s mother, Birgit Holmquist was also a model who has posed for Axel Ebbe’s statue Famntaget, in Smygehuk, Sweden.

Maya, the elder of two children born to actors Ethan Hawke and Uma Thurman has dyslexia. It resulted in her frequent changing of schools during her primary education. Maya finally got enrolled at Saint Ann’s School, a private school in Brooklyn, New York that emphasizes artistic creativity and does no graded work. The artistic environment eventually drove her career towards acting.

Maya even took part in summer studies at the renowned Stella Adler Studio of Acting in New York and Royal Academy of Dramatic Arts in London. Then, she attended the performing arts school Juilliard for a year and finally dropped out after accepting her role in Little Women.

Similar to her mother and grandmother, Maya modeled for Vogue at the start of her career. She was even selected as the face of the British fashion retailer, AllSaints’s 2016/2017 collection. In 2017, Maya was seen in a video campaign as one of several faces for Calvin Klein‘s innerwear range.

Putting her career aside, Maya loves to travel and enjoy her vacations to beautiful places.

Maya is a female given name with multiple meanings of different origin. Maya gives the meaning of “illusion” in Hindu philosophy. Also in old Persian, the very name means “generous.”