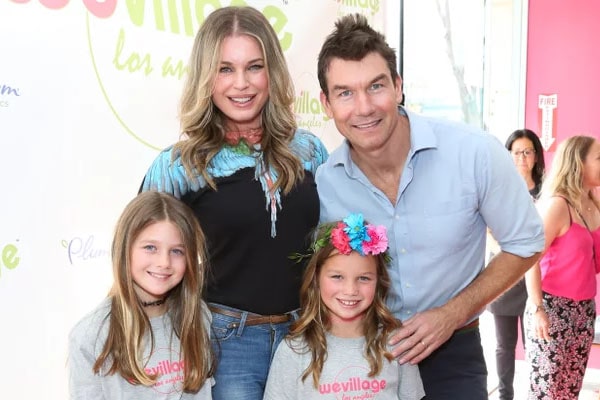 Jerry O’Connell is a talented actor married to actress-model Rebecca Romijn. The couple met back in a Maxim party when Rebecca was married to another man. However, the cupid threw its arrow to Jerry O’Connell and Rebecca Romijn, and they got married in 2007. Since then, they have been together for twelve years and share twin daughters, Dolly Rebecca Rose and Charlie Tamara Tulip. The adorable twin was born on December 28, 2008.

Let’s discover more about the twin children of Jerry and Rebecca.

Dolly Rebecca Rose and Charlie Tamara Tulip’s parents, Jerry and Rebecca, despite having many projects to work on, spend time with family. They are always celebrating festivals together, going on trips, and having lifetime memories.

We can see that the twins, Dolly Rebecca and Charlie Tamara, spend quality filled time with their parents. The family of four has a very close-knit relationship with each other.

Have A Fun Relationship With Their Father

Twins Dolly Rebecca Rose and Charlie Tamara Tulip’s father, Jerry O’Connell, is a talented actor known for Sliders, a director, writer, and so many more. He is one of the most talented artists out there in Hollywood. On top of that, he is a loving husband and a father too. The twins must rave about their father with their friends.

The twins are always having fun with their father. We can see that Jerry makes his girls crack with his humor. Daddy Jerry is still there to make his daughter’s day.

As the twins are always laughing with their father, they also share a special bond with their mother, Rebecca. Their beautiful mother is still there, supporting them and saving them from their father’s extreme humor. The girls must be grateful for their mother when their father chases them around the house with a new joke.

The twin’s mother, Rebecca, is a former supermodel and now a super mom. She disciplines her daughters and spends quality time with them. Both girls of Jerry are very fond of each other and are inseparable. We hope for a beautiful future for the twins.

The name Dolly is of English Origin, meaning gift of God. Whereas for the middle name, Rebecca is of Hebrew origin, which means servant of God, and Rose is of Latin origin, which is a flower.

The name Charlie is of English origin, meaning a free man. Whereas, for the middle name, Tamara is a biblical name, which means a date palm and Tulip is of Persian origin, meaning turban.