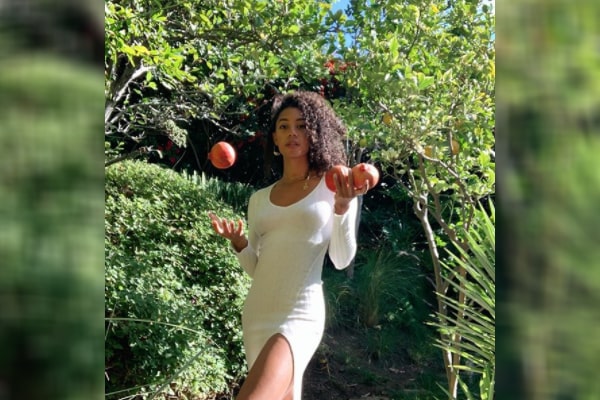 Dennis Haysbert's daughter Katherine Haysbert is a certified nutritionist and is spiritually tuned.

Dennis Haysbert is an American actor and voice actor known for his lead roles in tv shows and screen films. He has appeared in the Major League film trilogy, a political thriller film, Absolute Power, The Unit, Love Field, Heat, Incorporated, etc.

Besides being a successful actor and owner of a production company, Dennis Haysbert is also a proud father of two and divorced. Today, we will be talking about Haysbert’s daughter, Katherine Haysbert. Hence, let’s get your mind blown this amazing woman.

Dennis Haysbert is an amazing actor and producer but his daughter, Katherine Haysbert is even better. She is a certified nutritionist and is truly passionate about food.

Katherine Haysbert worked as the head chef in Cooking ‘Round The World’ for three months. Likewise, she served as a sous chef for Wellness in Schools as an intern for a month.

Likewise, Dennis Haysbert’s daughter worked as an intern for Open Source Wellness for nine months. As of now, she is a self-employed nutrition consultant. Katherine knows what she is talking about and hence has a mass follower on Instagram as well.

Furthermore, Katherine announced launching her website soon. Let’s hope Haysbert’s daughter becomes one of the most successful nutritionists in the coming days.

Is Also An Athlete

Besides on the road to being a successful nutritionist, Dennis Haysbert’s daughter, Katharine Haysbert has quite impressive athletic records in Track and Field.

Graduating from the University of California, Berkely, in anthropology, she dedicated her five years of college in Track and field. She started running from eighth grade and eventually ran on a national level when she was in Alverno High School. Moreover, she held the record for the 400m and 800m in the Horizon League.

Haysbert’s kid holds pretty decent records as a runner since her time in college as she finished 16th in the 800m at the Pac-12 Championship with a time of 2:11.61. Moreover, she claimed four top-five finishes in the 800m during her final season and notched a personal best of 2:09.52 at the Big Met.

Katherine won the 800m at the Sacramento State Open and the Brutus Hamilton Open in 2017. Going back in time, she was second in the 4×400 relay at the Big Meet and set her PR in the Pac-12 Championships in 2015.

Dennis Haysbert’s daughter appreciates her loves for running and believes that Track and Field taught her grit & perseverance.

Dennis Haysbert is definitely a secret keeper. Thus, his daughter is no different at all. She is very active on Instagram but does not have a personal touch but is spiritual instead. She shares what inspired her and FOOD. Well, your stomach might curse you as you scroll down her Instagram account.

As Katherine’s bio suggests, everything on the feed is organic and clean, even her Insta’s name is Gut Health and Energy Healer. While going through her account, it is evident that Katherine is in tune with her body and is all about organic food, and thoughts.

Well, it’s hard to find positivity in the century but Katherine’s Insta might as well motivate one to look into themselves. Born on September 9, 1994, to Lynn Griffith and Dennis Haysbert, she surely had a healthy childhood and has blossomed into a beautiful flower.

Let’s hope Dennis Haysbert’s daughter Katherine grows to succeed in her field of interest and does not need her father’s name to follow her on Google’s search.

The name Katherine has Greek origin which means pure.