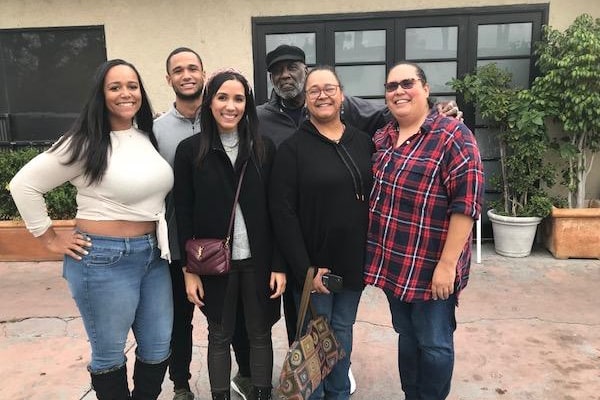 Shaft star, Richard Roundtree is an Amerian actor and former model. Nominated for several notable awards, including Golden Globe, Roundtree has made remarkable contributions in the entertainment world since 1963.

Besides being a notable actor, Richard Roundtree is a doting father of five kids from three different marriages. His first marriage with Mary Jane Grant resulted in divorce after two kids and a decade-long marriage. Similarly, Roundtree’s ex-wife. Karen M. Ciernia gave birth to three kids, and they separated in 1998.

Hence, we will be talking about all of Richard Roundtree’s children in this article.

Father Of Five From Different Marriage

Although all five Richard Roundtree’s children are grown-ups, married, and have given birth to their kids, their mama is still unconfirmed.

Despite being half-siblings, all five of them share a pretty good bond. Furthermore, Richard loves to upload pictures of them and embrace quality time with them. Interestingly, none of the Roundtree’s kids are into the show business except for one or two brief appearances.

Additionally, Richard Roundtree’s children made appearances on events with their father but mostly lived away from the media scrutiny.

Shaft star, Richard Roundtree’s son, John James Roundtree, aka Jay Roundtree, is more of an athlete. Born on November 3, 1998, Jay is a talented student. He studied at the University of San Fransisco and graduated from Jesuit High School in 2016.

Although Richard is in the entertaining field, James is more into sports. Although the 21-year-old does not have legit work experience, he did volunteer as a soccer coach for Dyer Kelly Elementry in 2014 and Make-a-wish North Carolina in 2015.

Well, Richard’s son is young but it looks like he has already found love. According to a few posts from Richard Roundtree’s Facebook, we found out that he’s been dating someone and spend quality time with her.

Let’s hope the future’s bright for the only male offspring of Richard Roundtree.

Speed Racer actor Richard Roundtree’s daughter, Taylor Roundtree, is a jumping instructor based in Auburn, CA. The horse enthusiast has participated in Pony Club since the early 90s and has been eventing for the past several decades.

Richard Roundtree’s daughter, Tayler, is very good at her work and is a hard worker. Let’s hope she prospers in the future.

Aforementioned, Richard Roundtree’s children are mostly away from the media.

Moreover, Roundtree’s daughter, Morgan Roundtree, is currently pursuing International Politics at the University of San Fransisco. According to Morgan’s LinkedIn, she is currently working at the Marshall Wace since 2017. Before Wace, she served as a security analyst and communication specialist for the UN Women in 2017.

Besides Morgan’s interest in Politics, she graduated from the University of Liverpool in business media and communication.

Besides Morgan, Taylor, Jay, Richard Roundtree’s children, Nicole Roundtree and Kelli Roundtree live a life away from the media scrutiny. Let’s hope they are doing well and in comfort.

Nicole means ‘victory of people’ and has a Greek origin. Similarly, Kelli is of Irish origin, which means descendant of Ceallach” and “warrior. Likewise, John means ‘God is gracious’ while James means Supplanter and has Hebrew origin.