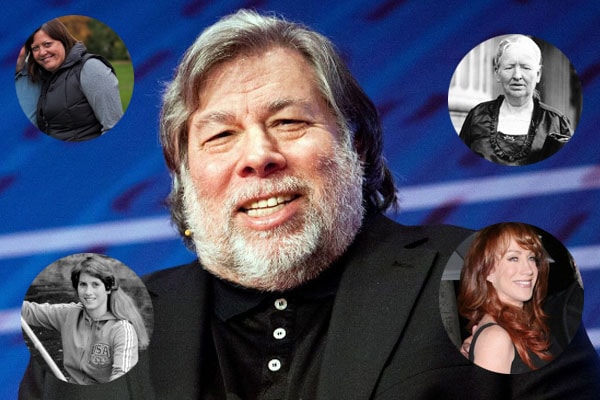 Stephan Gary Wozniak aka Steve Wozniak is the father of three children. Wozniak is an American engineer, inventor, programmer, and technopreneur whose contributions to technology pioneered the revolution of personal computers. He is also one of the many founders of Apple Inc. Wozniak is one of the good friends of late pioneer Steve Jobs and they together started their career at the same time.

Although many know Steve Wozniak as one of the co-founders of Apple tech., however not many people know about his relationship status, his wife and baby mamas and children. So let’s glance at Wozniak’s personal life status.

Candice Clark is the Baby Mama of Steve’s Three Children

Wozniak started dating Candice Clark back in the ’80s. They got married in 1981 and have three children together. Steve Wozniak’s children are named Jesse John Wozniak, Stephen Gary Wozniak Jr., and Sara Nadine Wozniak.

Initially, Candice was the US Olympic Slalom Canoe gold-medalist. She was also working as Apple‘s financial Analysis Staffer at that time before she fell in love with Steve.

Wozniak and Clark were in a serious plane crash in February 1981, nearly killing everyone on board. They both survived the Airplane crash, however, Wozniak suffered from short-term memory loss. Candice was the one who helped him recover from the injury.

However, the marriage didn’t work out and ended in divorce in 1987, lasting 6 years.

Steve Wozniak got married to Alice Robertson in January of 1976. The ex-couple first met through a phone conversation. Wozniak’s commitment to Apple led the distance between the pair. In 1980, the couple got divorced after spending 4 years of marital life together.

In 1990, Wozniak again got married to his childhood friend, Suzanne Mulkern. The ex- pair were the schoolmates of his grade. Suzanne was a lawyer, who was also the baby mama of her three children. The 3 children were from Suzanne’s previous marriage before she met Wozniak. However, things didn’t go well for the couple, and they both separated, after 14 years of marriage. The union divorced in 2004 without sharing any children.

Wozniak was rumored to have an affair with Kathy Griffin in 2007, before getting secretly married to his fourth wife, Janet Hill. The duo of Steve and Janet married in 2008 with the absence of their relatives and friends.

The long-term friend of Steve Wozniak, Janet Hill was Apple’s Education Development Executive. The two hadn’t had any children together.