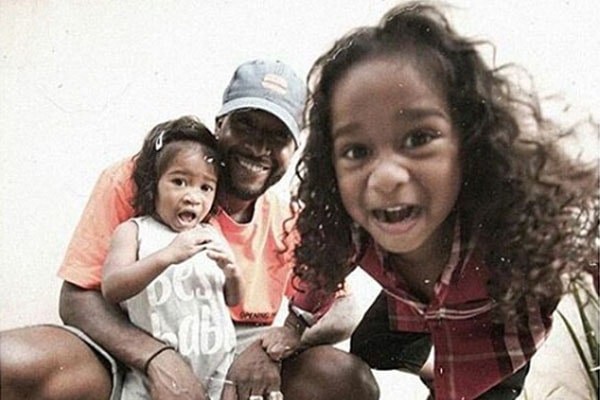 Singer Omarion‘s son Megaa Omari Grandberry was born on the 7th of August 2014. Megaa is the firstborn child of Omarion with baby mama Apryl Jones. The handsome Megaa Omari also has got a cute baby sister named A’mei Kazuko Grandberry.

When Megaa first arrived into this world, father Omari Ishmael Grandberry aka Omarion announced his arrival on his Instagram. According to Omarion’s caption, his son Megaa Omari weighed 7 pounds 4 ounces and was 20 inches long. Omarion had stated that he witnessed a miracle and was eagerly waiting for his little one.

The 4-year-old son of singer Omari is already a social media star. With over 11.2k followers as of November 2018 on his Instagram profile, Megaa Omari has already gained much more followers than many of us. As we know Megaa is too young to have his own social media account, the profile is probably run by his parents or someone near to him.

Megaa Omari usually posts photos of him along with his sister A’mei Kazuko and parents Apryl and Omarion. Despite Megaa Omari Grandberry’s parents, Omarion and Apryl Jones have split up they remain close to raising their child. Plus looking at the photos of the whole family we can assume how much of a loving bond they share.

But for the time being the handsome Megaa Omari is a little bit inactive as no photos have been uploaded since the October last year. Maybe he started going to school or something. Nevertheless, it has got plenty of pictures for everyone to see and admire how cute of a son singer Omarion has.

After almost a year of Megaa’s arrival, his little sister A’mei Kazuko was born. Omarion’s daughter A’mei Kazuko Grandberry was born on the 7th of March, 2016. The brother-sister duo of Megaa and A’mei share a loving bond with one another. Plus many call the cute A’mei twin of her elder brother Megaa.

The name Megaa is a diminutive form of nameMega which has an Indonesian Origin which means “the clouds.”

As for the name Omari, it is an African baby name which means “God the highest.” Plus singer Omarion’s first name is also Omari.

Me and this lil guy!!!❤ pic.twitter.com/kkwLw3TznQ