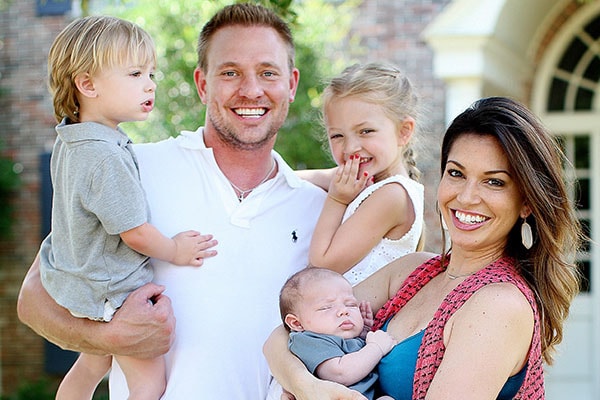 Melissa Katherine Rycroft-Strickland is an American television personality and a mother of three children. Melissa had all her children Cayson Jack Strickland, Ava Grace Strickland, and Beckett Thomas Strickland together with her husband Tye Strickland.

American television personality Melissa Rycroft tied the wedding knot with her husband Tye Strickland on 12th of December 2009 at sunset in a beach ceremony in Isla Mujeres, Mexico. As of 2019, the romantic couple still remains happily married and Melissa claims it to be the best decision of her life.

Ava Grace Strickland Is The Eldest Among Her Siblings

The eldest child among all of Melissa Rycroft’s children, Ava Grace Strickland was born on 16th of February 2011 in Dallas, Texas. It is all obvious that Ava Grace’s mother Melissa was very happy and quite anxious to face the new life after her firstborn baby. The mother of three told the People:

“Our lives been completely changed so much in the last two years and we have been blessed with the best change ever by our beautiful baby girl, Ava.”

Not only that but, there is a very strong bond between the mother and daughter and the two are often spotted enjoying their time together.

Beckett Thomas Strickland Was Born In 2014

However, there not much information regarding the upbringing of Beckett including his siblings have been revealed yet..

Cayson Jack Strickland Is The Youngest Child Of Melissa Rycroft

The former reality star Melissa Rycroft’s third child Cayson Jack Strickland was born on 18th of May 2016. Cayson is the youngest child in his family.

Being the youngest in the family comes with numerous advantages. Cayson might receive the most attention and love in his family.

Cayson Jack Strickland: Cayson is a male given name of Irish origin which means “courageous and tough.” Whereas Jack is a Latin Engish boy’s name which gives the means of “God is gracious“.

Ava Grace Strickland: Ava is a girl’s name derived from the Latin English word “avis” which means “bird.” Also, Grace is a feminine form of Latin origin which gives the meaning of “eloquence of kindness, mercy, or favor.”

Beckett Thomas Strickland: Beckett is an old English name which means “beehive.” While Thomas is an Aramaic personal name which gives the meaning of “twin.”