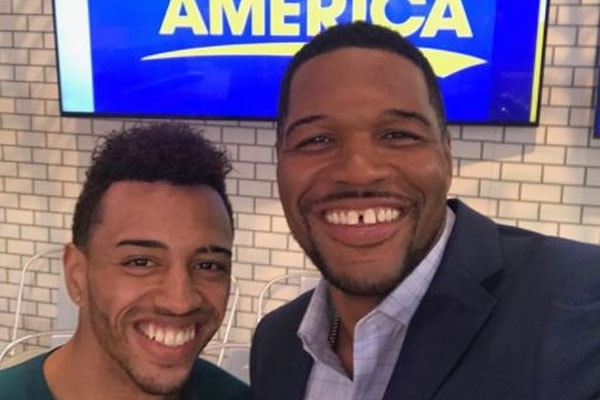 Michael Strahan‘s son Michael Strahan Jr. was born in 1995 in Germany. Michael had his only son Michael Jr together with his ex-wife Wanda Hutchins. Strahan Jr.’s parents shared their wedding vows back in 1992. However, the former couple amicably got divorced after three years of their marriage in 1996.

Strahan Jr. is the middle child of his father, Michael. He has an elder sister named Tanita Strahan. Also, Michael is an elder half-brother to his twin sisters named Sophia Strahan and Isabella Strahan. The lovely and cute twin girls are 14 years old as of 2019.

The former NFL player, Michael Strahan is a proud father as his son passed the high school milestone with flying colors back in June 2013. The proud father plastered the good news across his social media handles.

Michael Strahan even threw a party for his graduated son along with his sisters. The family crowded him during the festivities showing nothing but happiness for their brother and his accomplishment.

Strahan Jr.’s elder sister, Tanita has a degree from the Institute of Design and Merchandising in LA. Meanwhile, Michael is earning his degree in psychology.

Strahan Jr. Is Close With His Siblings

Even though they were raised apart, Michael Jr. and Tanita are close to their half twin sisters, Sophia and Isabella. All of Michael Strahan’s children seem closely bonded with each other.

Strahan even added that his kids give him strength. After Strahan and his first wife separated, Michael and Tanita remained and grew up in Germany.

Nevertheless, Michael seems a very caring parent as he loves his time being with his kids. For him, it is all about his family and kids more than anything.

Michael is a male given name of Hebrew origin. It provides the meaning of “Who is like God?”