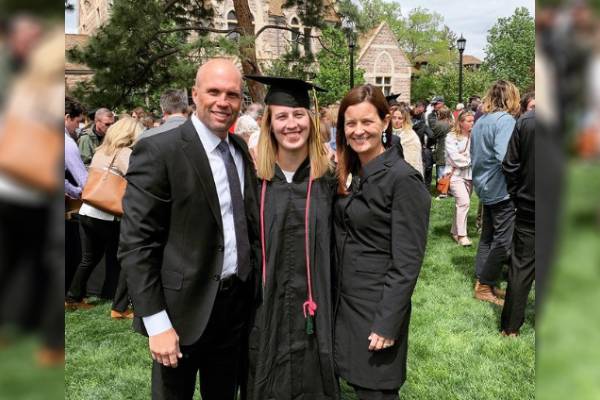 The renowned former NHL player and head coach, Michael Yeo or Mike Yeo, is from Canada. He has been involved in the league since 1994. In 2000, he started his coaching career and has since served in several NHL teams, including Houston Aeros, Minnesota Wild, St. Louis Blues, and Philadelphia Flyers.

Talking about his personal life, the coach leads a beautiful family together with his wife, Tanya Yeo. He is also a proud father of his kids, Braeden Yeo and Kyler Yeo. Both have grown up and achieved considerable success in their careers. Thus, in today’s article, let’s get to know Mike Yeo’s daughter, including details about her boyfriend.

Is The First Born

Braeden Yeo’s parents first met each other back in 1990. Both dated for seven years before walking down the aisle in July 1997. However, Mike Yeo’s daughter, Braeden, was born in November 1996, a year before his marriage. After three years, his son, Kyler, arrived in March 1999.

Mike Yeo’s son, Kyler, is also involved in ice hockey. He currently plays in the NCAA III league for Augsburg University. Furthermore, the Yeo siblings share a close bond with each other. They often share pictures together on their respective social media accounts.

The Yeo family enjoys fishing and often uploads posts of them catching different fishes. The lovely family also bonds over their other similar interests. In addition, Braeden’s father and mother are very supportive of her career.

Also Read: More About A Lovely Family Of Gerard Gallant With His Wife Pam, And Two Children, Melissa and Jason

Is A Graduate Of Colorado College

Mike Yeo’s little girl went to East Ridge High Scholl in Woodbury, Minnesota. She was involved in the school’s hockey team. After completing her formal education, the beautiful daughter went to Colorado College and graduated with a degree in creative writing in 2019.

Futhermore, Braeden was also working towards a master’s degree in communicative sciences and disorders back in 2020. So, she might still be pursuing it. Also, speaking of her playing days, the East Ridge graduate played on the boys’ team due to the limited opportunities for girls in the hockey community. She even had to change dress in medical closets and storage rooms.

In October 2020, Braeden was named the head coach of the University of Utah Hockey’s women’s hockey program, Skatin’ Utes. Before that, she was serving as an assistant coach of the same team for the 2019-20 season.

Mike’s daughter has followed in his footsteps and is pursuing her career as an ice hockey professional. She must be utilizing her playing experience and demonstrating excellent skills in her team. In addition, her parents must be proud of her achievements.

Apart from her flourishing career as a coach, the Colorado College alumna is also doing great in her personal life. Mike Yeo’s daughter is dating a guy named Jake Shapiro. The lovely couple has been together for three years as of now and seems to be madly in love.

Furthermore, Braeden Yeo’s boyfriend is from Onalaska, Wisconsin. He completed his formal education at Onalaska High School. Afterward, the handsome guy enrolled at Colorado College in 2015 and graduated with a bachelor’s degree. As both Jake and Braeden went to the same university, could it be they met in college?

According to his Facebook account, Jake previously served at The Red Pines. He currently works at Colorado College. Besides, the Skatin’ Utes head coach’s boyfriend also seems to love spending his free time fishing. Shapiro also has an Instagram account where he mostly posts pictures of mountains, lakes, and sunsets. The lovebirds look very happy together and often visit different places. Above all, we wish them a lasting bond.

Nonetheless, Mike Yeo’s daughter has followed in his footsteps and is slowly building her own impressive resume. In addition, she is also doing great in her love life. We wish Braeden Yeo a successful career and a wonderful life ahead.

The name Braeden is of Irish origin that means Broad, Brave, and Wise.