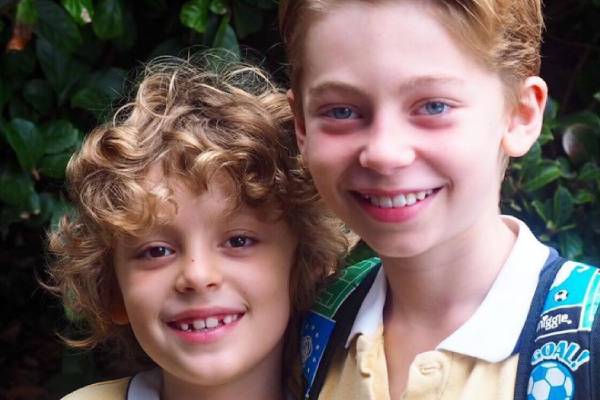 Richard Roxburgh and Silvia Colloca are some of Hollywood’s most iconic couples. The couple met in 2003 on the set during the filming of Van Helsing, an American gothic horror movie. And after going out for a few months, they tied the knot on September 25, 2004. Moreover, the pair have also welcomed three children in their decades-long marriage.

Roxburgh has amassed a sizable fan following because of his work. The actor is, nevertheless, recognized for being a celebrity who keeps his personal life secretive. As a result, no or little information regarding his children has been made public.

So, let’s discover more about Richard Roxburgh’s children, Miro Roxburgh, and Raphael Roxburgh. Let’s also take a look at how they are growing up.

As previously stated, Silvia and Richard have been married for over a decade. Moreover, in their union, the couple has welcomed three beautiful children into the world. The pair first welcomed their eldest child, Raphael Jack Domenico Roxburgh, on February 10, 2007. Then their second child Miro Gianni David Roxburgh was born three years later, on October 1, 2010.

Richard and his wife are very persistent about modestly raising their kids. The couple hopes to raise their kids to be decent human beings. Furthermore, they want their babies to communicate openly and without fear, which many of us still struggle with. Nonetheless, Roxburgh still tends to keep their children away from the limelight as much as possible.

That being said, Richard does not keep his children entirely hidden from the public eye. For instance, the actor was accompanied by his son Raphael as he was honored with a caricature at Sardi’s on March 14, 2017. Similarly, on March 27, 2021, his wife and son Miro attended the Australian premiere of Hamilton at Lyric Theatre, Star City.

As kids often look up to their parents, Roxburgh’s sons may follow in his footsteps in the future. However, the Roxburgh siblings are still very young, so it is relatively early to assume that they will continue their parent’s legacy. So, while the celebrity parents might be superstars, it might be a while until we see Richard Roxburgh’s children share the spotlight with them.

Nonetheless, let us wish the celebrity kids well and hope that they succeed in their lives.

Has A Baby Sister

In addition to the boys, the couple also has a beautiful daughter named Luna Roxburgh. Richard Roxburgh’s daughter was born on April 21, 2017. However, even before her birth Silvia announced her pregnancy to the world on Instagram.

And well, the photos of their gorgeous daughter have not stopped flooding her social media since. So, it is safe to assume that Luna’s parents are pampering her as their youngest and only daughter.

Similarly, the Roxburgh brothers are also very protective of and love their sister very much. Unfortunately, none of Richard’s kids are active on any social media platforms, so apart from the pictures shared by their mother on her Instagram, little is known about the kids. Nonetheless, looking at the photos, it is evident that the family enjoys spending time together. Moreover, the kids are also close to their grandparents.

Still, let us hope that the children will not shy away from the media once they grow up, and we get to see more of them as time passes.

Celebrity kids and lavish lifestyles go hand in hand. With their parents being able to afford just about anything, it is no surprise that the offsprings of entertainers live a lavish lifestyle. Moreover, some celebrity children already own millions of dollars worth of expensive wardrobes and extravagant miniature toys.

On the other hand, Miro and Raphael’s parents appear to be modest individuals who understand that wealth isn’t the only way to happiness. So, it may come as a surprise that the children of such well-known actors lead an entirely ordinary lifestyle. Nonetheless, the kids still enjoy a comfortable life.

So, let’s wish Richard Roxburgh’s children well for the time being and hope that their lives prosper in the coming days.