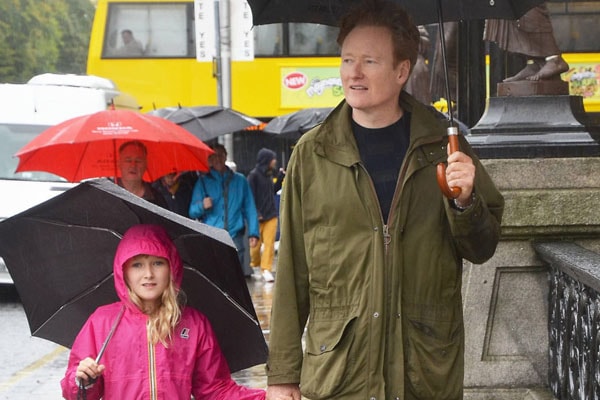 The American television host, Conan O’Brien’s daughter, Neve O’Brien was born on October 14, 2003, as the eldest daughter of the family. The firstborn of Conan and Liza, Neve, is the big sister of adorable young brother, Beckett O’Brien.

The proud parents, Conan O’Brien and Liza Powel O’Brien, dated for eighteen months before deciding` to walk down the aisle in January 2002. The auspicious ceremony was in Powel’s hometown of Seattle which was attended by close family and few friends.

The TV host Conan O’Brien had his adorable family in stitches while sitting outside at the Clippers game in Los Angeles. The family of four sat front row at the Staples Center, animatedly cheering on the team and laughing it up. Likewise, the mini-me daughter of Conan shared an uncanny resemblance to her father and shared a mutual interest in games, especially basketball.

The proud father, Conan confesses that being a dad is the greatest thing in the world except for when it comes to assembling things. The father of two adorable kids, Conan O’Brien is not just good at making America laugh every night on TV, but also making fans at awe with his bond with the family. The father-daughter duo shares an amazing bond together and the relationship between the two is adored by many.

The firstborn and only daughter of Conan O’Brien with wife, Liza Powel O’Brien, Neve, is the eldest child of the family and shares her parents with an adorable brother Beckett O’Brien. Young O’Brien was born on November 9, 2005. Besides that, the siblings are very close to one another and almost inseparable.

Despite having his life revolving around media and television, the television host prefers his family as well as his personal life private. However, the intimate relationship of the family is evitable in the pictures and public appearances of the celebrity family.

The name Neve is a beautiful name for a baby girl. The wonderful name is often an anglicized version of Niamh. Likewise, in Irish mythology, Niamg was the princess daughter of a sea god. The feminine name “Neve” is also a variant of “Neva” in Latin. The meaning of the lovely name is “snow” in various languages including Spanish and Portuguese. Besides that, the Irish name could also mean “radiant.