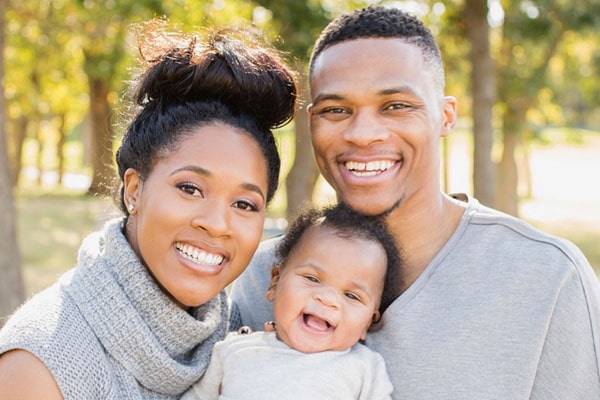 Russell Westbrook, a well-known NBA star, tied his knot with his long-time girlfriend Nina Earl on August 29, 2015. In fact, they were college sweethearts back in the days. They met at UCLA when Russell was just a rooky basketball player. Now the lovely couple is proud parents of three kids, a son and twin daughters.

Russell Westbrook’s son Noah Russell Westbrook was born on May 16, 2017. Like his father, little Noah seems to be really into basketball. He has inherited his father’s good looks and classy nature. So, let’s get to know more about Russell’s only son Noah.

Noah Westbrook, often referred to as No No by his father, loves spending time with his dad. Both the father-son duo loves hanging out near the basketball court, where Russell teaches his son how to play basketball. In fact, according to little Noah’s dad, he is a pro at it, he runs like an athletic player and scores like an NBA player.

Furthermore, like father Russell, little No No does not wear the same dress another time. Both the father-son duo wear similar dresses and shoes. We can say Russell likes to dress his son like him, and when done, little Noah looks like a mini version of his dad.

Plus, in an interview in the Ellen Show, he said that the birth of his son is the best thing that has happened to him in a long time. He said he cherishes every moment with his little man and would love to see what a fine lad he turns out to be. Where ever he goes, he takes his son with him; whether it is a party or a basketball match, his son always accompanies him. Well, the father-son dynamic looks fantastic together.

Aforementioned, Russell has a son and twin daughters. The family of five also includes the beloved beau of Russell, Nina. Nina is a proud mother of three children, and alongside, she is also the co-founder of The Little Ark OKC. She has an entire Instagram account plus a website dedicated to Little Ark. It is a boutique that offers gifts for everyone, baby gear/apparel, children’s furniture, & classes + events for kids, and their parents.

Speaking of the Westbrook family, they love traveling and shopping. As mentioned above, Russell never wears the same cloth another time. So, it’s obvious that Westbrook does a lot of shopping. When asked what he does with his cloth, Noah’s father Russell simply said he donates it to his friend or for a better cause.

What Little No No Loves

Russell Westbrook’s son Noah Westbrook loves spending time with his two little sisters Jordyn Westbrook and Skye Westbrook. He loves playing at the beaches, parks, and obviously the basketball court. Russell’s little man is also a spiderman fan and adores what seems to be a spiderman’s mask drawn on his face. It was his second birthday, and little Noah seemed to be really happy alongside his parents.

The cute Noah, like any other child, adores the comfort of his mother’s lap and sometimes his father’s too. He swings in the park and swims in the pool. Noah loves playing basketball with his dad and takes excellent care of his little siblings. He is a perfect boy in every way, says mom, Nina.