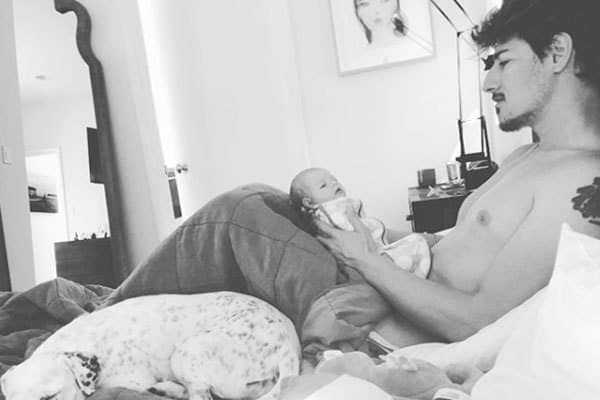 The little Oliver Lion arrived into this world at 11:10 am in Santa Monica, California and he was weighed in at 7 pounds and 6 ounces. As it was the first time for Eric being a father, he stated that it was the most amazing day of his life and he was happy to welcome a new being into the world.

Well, Eric and Erin are the proud parents of their only son Oliver, but they also have a rescued dalmatian named Coconut which they have raised as their baby. So we can basically say that Coconut is the elder sister of Eric’s son Oliver Lion. The “Six Feet Under” actor frequently uploads photos of his son and his dalmatian Coconut. We can see how much closer they are.

Alongside that, Eric Balfour takes his son Oliver Lion to the beach along with his wife Erin and tend to spend lovely family time together. It seems like the small family of the actor Eric is now complete.

All in all, it looks like the 41-year-old actor is having a blast being a father for the first time. Every time he uploads something related to his little one his posts are filled with comments of his fans congratulating him and commenting awe comments.

We bet that Eric Balfour and his wife Erin Chiamulon are eagerly waiting for their little one to grow up. But who knows that in the coming future they might even add a new member into their small family of four.

As for the name Lion, it has many meanings. One of them is a “great warrior.” Eric Balfour has undoubtedly given his son Oliver Lion Balfour one meaningful name.