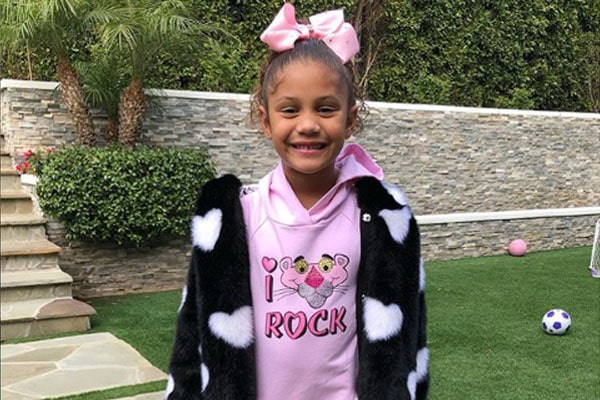 Paul George is an American professional basketball player for the LA Clippers in the NBA. He has made a remarkable career as well as net worth from his hard work. Well, going through his personal life and family, he is the father of cute Olivia George with his girlfriend, Daniela Rajic, and was born in May 2014 in New York.

Olivia’s birth brought loads of happiness in Paul and Daniela’s life. She has an adorable younger sister named Natasha George. The small and happy family’s life is a happy one. Getting back on the topic, let’s get to know more about Paul George’s daughter, Olivia George.

After Olivia’s Birth, Rajic Filed A Paternity Suit Against George

When Olivia’s mom gave birth to her in 2014, she was a stripper back then at a club called Tootsie’s in Miami. According to Heavy, the IBT report stated that he offered her $1 million to abort the child. But George’s reps denied the allegations saying that it was all lies about the money and abortion. She also filed a paternity suit against the NBA baller, months later.

Both of them went to court to settle the situation. Finally, they came to terms with full joint custody and a financial package. Paul and his baby mama, Daniela, raise their daughter together. Also, the LA Clippers star was thrilled to be a dad to his cute and adorable daughter, Olivia. The settlement turned out to be a great choice, where both of them are living a beautiful life now.

As time passed by, Olivia’s parents’ love for each other grew up, and in 2017, they again became parents to their second daughter, Natasha George. Even though the couple had a rough start, their relationship became more serious after the arrival of Olivia and Natasha into their world.

Olivia And Her Sister Are Best-Friends To Each Other

As stated prior, Paul George and Daniela Rajic’s daughter, Olivia, became an elder sister to the youngest family member, Natasha, in 2017. She and her parents were delighted to welcome the newest member of the family. The cute sisters are playing partners for each other. Olivia and her sister, Natasha, are the ones who bring out smiles in the George family.

Going through Daniela Rajic’s Instagram, she often posts lovely photos of her daughters. She also posted Olivia and Natasha enjoying the Christmas 2019 together. They are like gal pals who are also partners in crime. And we can assume that Olivia must be taking care of her young sister very well.

Since Paul George has a hefty net worth of $60 million and Daniela Rajic owns the swimwear-line ‘Nude Swim,’ she is definitely getting a luxurious and lavish life for sure. Olivia’s parents are doing everything, just to see their daughter happy forever.

Paul and Daniela take their kids wherever they go if that involves lavish vacations, holidays, or parties. Paul George’s daughter is very fortunate to have such amazing parents. They love sticking with their young ones and enjoying every second with them.

We can say that the lovely couple is doing the best they can to be the ideal parents. We hope Paul and his girlfriend, Daniela, get married soon enough to take their relationship to the next level.