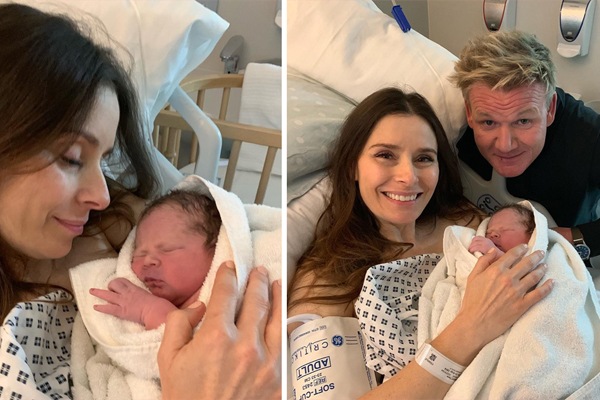 Sharing the picture of son Oscar on his Instagram account, celebrity star Gordon Ramsay phrased the caption with a clever wisecrack; inducing a light-hearted chuckle among his followers. He joked he had finally won an Oscar

The ecstatic dad was quick to set up an Instagram account for his cute little son Oscar Ramsay, which boasts of about 80k followers. Though the colossal following our junior Ramsay has received, he has only followed 8 people; including his siblings, his father and the Beckham brother’s: Brooklyn and Romeo Beckham. The Instagram account for Oscar is managed by his beautiful sister, Matilda, as seen on his bio. The very first picture to be posted on Oscar’s account was of his sister and himself, which was friskily captioned.

I would like to introduce you to my big sister Matilda 👋🏽👋🏽 she gave me the biggest hug and so far she’s my favourite ….💜💜

The gleeful family also had a photoshoot before leaving Portland Hospital where baby Oscar was born. The radiant mother, Tana, can be seen cradling Oscar in her arms and planting a soft kiss on his forehead. The siblings also posted pictures with their baby brother in their respective Instagram accounts.

When Did The World Know Tana Was Pregnant With Her Son Oscar?

Gordon Ramsay’s son Oscar Ramsay is born to the family of a prominent celebrity chef. He had Oscar with his wife Tana Ramsay. His father, Gordon, announced to the world of wife Tana’s fifth pregnancy in a sweet family video posted on New Year. The Ramsay’s are recorded greeting everyone a wondrous New year when at last Gordon flips the camera to his beautiful wife’s baby bump. He captioned the short clip, ‘Exciting news! Happy new year from all the Ramsay’s’.  Before that, the Ramsay’s had been quite discreet about the whole affair.

Oscar’s parents suffered a tragic loss in 2016 when Tana endured a miscarriage five months into her pregnancy. The incident left the whole family devastated. Gordon had posted on his facebook about the incident and thanked everyone for their support through their tough time.

Baby Oscar is the newest addition to the Ramsay household, making the jubilant couple parents for the fifth time. Oscar is preceded by older siblings Megan Ramsay(21 years),  twins Holly and Jack Ramsay(19 years), and Matilda Ramsay (17 years). The siblings truly treasure their brother Oscar and upload his pictures on their social media here and now.

Oscar Ramsay has definitely acquired massive stardom due to the colossal popularity of his celebrity father. His birth has rendered his family with abundant happiness and love. We cannot wait to see Junior Ramsay grow!

For more updates on Celebrity Feuds, Celebrity Babies and Entertainment, make sure to catch up with us on eCelebrityMirror.