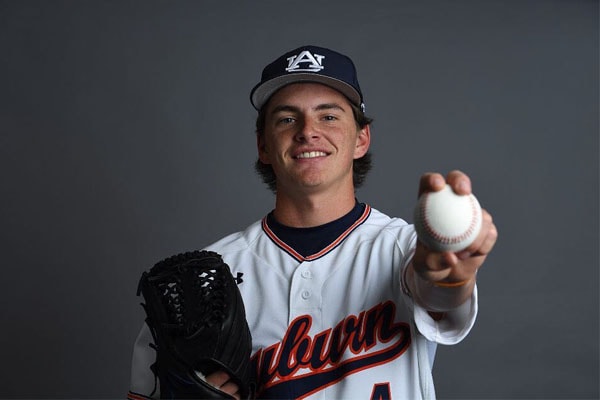 The Baseball Hall of Famer, Tom Glavine’s son Peyton Glavine plays baseball for LA Angels. The son of proud parents, Christine and Tom Glavine, Peyton is a graduate of Blessed Trinity (Roswell, GA) and an Auburn baseball signee. Peyton has followed his father’s footsteps regarding baseball and is a lefthand pitcher like his father. The LA Angels selected the 19-year-old Peyton in the 37th round of MLB draft.

Peyton’s parents, Tom and Christine walked down the aisle in the year 1998 and share five children including Peyton Glavine. The four sons are- Peyton Glavine, Jonathan Glavine, Mason Glavine, and Kienan Patrick Glavine. Likewise, the only daughter of Glavine family is Amber Glavine. The huge family lives in Johns Creek, Georgia.

The American retired baseball player, Tom Glavine trains his five children, including Peyton, and also coaches his sons’ baseball and hockey teams. The young Peyton is a quick learner and is on his way to being the next MVP like his father.

The young Peyton made five appearances in his first year with the Tigers and made his collegiate beginning in the second game of the seasons vs. Longwood on February 17, 2018. Glavine Jr. has also recorded the final three outs in scoreless fashion and struck out Batter vs. Bryant on Feb 23, 2018. Likewise, Peyton played for Andy Harlin at Blessed Trinity Catholic High School and was rated eighth-best left-handed pitcher in Georgia.

Baseballer Peyton grew up watching his father play and Father, Tom Glavine, is totally supportive of his son and has helped him a lot with being a pitcher. Furthermore, Peyton has committed to play baseball at Auburn University in August 2016.

Besides being a baseball player, the young son of Tom Glavine and Christine Glavine, Peyton loves fishing and often travels to various destinations for his passion. Peyton has caught rare fishes in multiple locations like Carnelian Bay, Auburn, Harbour Island, Tahoe City, and so on. The 19-year-old Glavine posts pictures of different fishes he catches on his Instagram. Furthermore, young Peyton loves traveling with his family.

The name “Peyton” or “Payton” indicates a surname derived from a place’s name, meaning “Pœga’s town” in Old English. Another source indicates the name means “fighting man’s estate.” However, In Scottish, the meaning of the name is “Royal”.