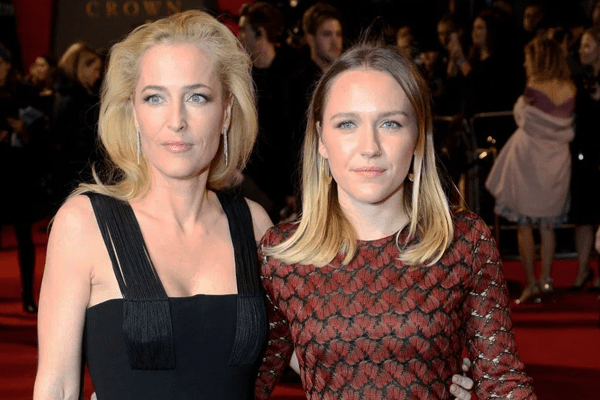 Piper gets her last name from her father. He is the assistant art director of X-Files, Clyde Klotz. The gorgeous Piper was born during the production of the second season of “The X-Files”. The cool part is, she has an episode named after her.

Episode 15 from the third season is titled “Piper Maru”.

According to the description of Piper Maru’s Instagram, she is an alien baby. She is an aspiring art director and also an avid cake decorator. Piper is a shy one, you will find the number of sketches more than her own photos.

But during 2015, Piper attended the Olivier Awards 2015 alongside her mother Gillian. Seeing her it was not a mystery that Gillian Anderson’s daughter is a stunning drop-dead gorgeous.

The resemblance between the daughter-mother duo is so uncanny that people may confuse them for either one. In matching black strapless gowns, the lovely duo was a vision on the red carpet.

It was not the actress Gillian Anderson but her stunning 23-year-old daughter Piper who stole the show.

We can clearly see that Piper Maru Klotz inherited a lot of looks and beauty from her mother Gillian. But the main question is, did she inherit her mother’s acting skills too?

Well, the answer is no. The actress revealed that when Piper did her first play, she hated it. Gillian is glad though for the road to acting is very much difficult.

Rather than that, Piper is a great artist. If you are following her on her Instagram account then you will surely get what we are saying.

The mother-daughter duo has attended other shows too. Gillian hit the red carpet with her daughter Piper as she stepped out in London for The Crown’s premiere. Both were looking amazingly stunning and gorgeous. It is no surprise many of the people’s eyes were fixated on them.

The name Piper is a derived form of “pipere” which comes from Germanic “pfeife” which means ‘whistle, pipe.’

As for the name Maru, it is a Polynesian baby name which means gentle.