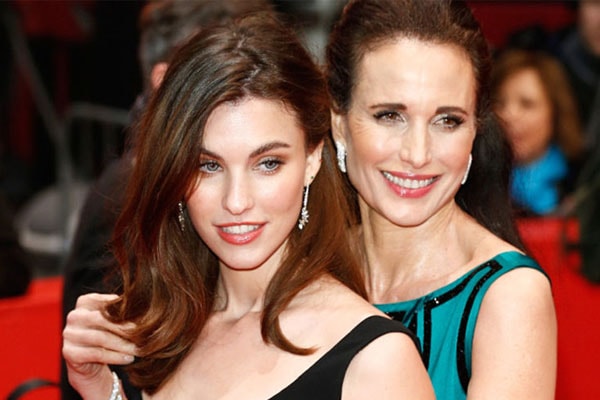 The American actor and fashion model, Andie MacDowell’s daughter, Rainey Qualley was born on March 11, 1990. Her father, Paul Qualley, ex-husband of Andie was her fellow model and they met while shooting for the ads. Together, they have three children but unfortunately, the couple ended up divorce in 1999.

Andie’s first daughter, Rainey is a great singer. She records her music with her band group with whom she performs in the live concerts. In 2012, she earned her title in the Miss Golden Globe. In her family, she has an elder brother named Justin Qualley and a younger sister, Sarah Margaret Qualley.

The 29-year-old, Rainey is blessed with so many talents. Not only as a singer, but she has also been featured in movies such as Ocean’s fight, Mighty fine, and as Perl in Perfect (2018). In 2015, she made her musical debut under the name “Rainsford”. Rainey’s dad is a musician and that’s how she got acquainted with music. Most of her songs are about her personal depression and nightmares.

Rainey and her sister, Margaret both are amazing dancers who have been very ambitious from a young age to set up their career on dancing. The talented, Rainey began her dancing career at the age of two. Like her mother, she is destined to shine on the national stage. Not only that, but both sisters have also got attention through fashion sensation. Their beauties and talent have taken them to many places including New York Fashion Week.

Rainey Qualley Takes Her Mother As Prime Inspiration In Her Life

Rainey’s mother, Andie is one of the famous actresses and model. The mother-daughter duos have worked together in a couple of movies. They have been featured together in 2012’s Mighty Fine and in the indie romance Falcon song. Besides movies, Rainey and her mother have got the best team spirit outside the screen too.

The mother-daughter duo had teamed up with Tylenol where people shared their motivational story. Rainey shared that her mother has been supporting her throughout her journey and she helped her to explore her passion.

The name Rainey has the origin of either Irish or Scottish. Rainey denotes queen.