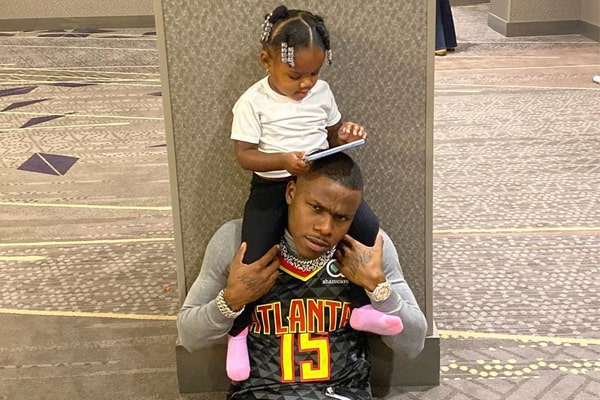 DaBaby is a father of two children and is planning to welcome another new member. Image Source: Instagram.

Born as Jonathan Lyndale Kirk on December 22, 1991, DaBaby is a renowned rapper, singer, and songwriter. Previously known as Baby Jesus, he rose to the mainstream after releasing several mixtapes between 2014 and 2018.

Along with the growth in career, DaBaby is blessed with babies as well. Although controversial news surrounded the birth of his children, he sure is a protective father. Therefore, let’s talk about rapper DaBaby’s children.

How Many Children Does DaBaby Have?

Rapper DaBaby is a father to two children and preparing for a baby on the way. He seems to be an amazing father. However, DaBaby has refrained from posting about his daughters and archived all of their previous posts.

Garnering 13 million followers on Instagram and several massive numbers of people on other social platforms, it sure is the instinct of a protective father to save them the scrutiny of the world. Being a father to a daughter and a son must have taught him to stay away from controversies and lousy media attention.

DaBaby has a daughter with his long-time ex-girlfriend, MeMe. In an interview, DaBaby’s baby mama revealed that the couple was together since 2014. DaBaby initiated his musical career during those years.

DaBaby’s daughter’s mother, MeMe also told that their relationship was grounded, and they became official when she was pregnant. The Suge rapper, DaBaby, is a great father to their daughter and MeMe’s son from her previous relationship.

Rapper DaBaby is loving his fatherhood and can go on extreme to protect his children. Furthermore, DaBaby’s daughter’s name is not published yet. Similar is with MeMe’s son; his identity is also under the shadow.

Once a video surfaced where DaBaby’s daughter can be heard asking her father not to speak bad words. Well, by that we can clearly see how well mannered the little girl is and how she is being brought up.

Plus, DaBaby was once involved in an altercation with a Beverly Hill Hotel employee. He then clarified that the employee recorded a video of DaBaby and his daughter despite being denied.

BOP rapper further told that he would by no means compromise his daughter’s safety as people on social media would know about their whereabouts. In a video published by TMZ, DaBaby was seen shoving some mindfulness in the employee’s mind along with his crew.

Presently, DaBaby has withdrawn all of the pictures from his Instagram and has few posts regarding his music. Even his baby mama, MeMe, has a few stories pinned in her highlights titled ‘motherhood.’

DaBaby Confirms Baby With Another Woman

DaBaby finally confirmed having a baby with another woman after his long time girlfriend and daughter’s mother, MeMe, blew up the social media accusing him of cheating her.

DaBaby’s baby mama posted several text messages on her Ig stories and claimed his unfaithfulness. On the other side, DaBaby responded that the accusations were false. He hopped on Instagram to reveal that the couple was not together when the new baby was conceived.

#Dababy responds to his ex alleging that he has a baby on the way.

He further said that he would not respond to any negativity that involved his daughter. DaBaby also continued to talk about how the world will see him love his daughter and never let negative light shine on her.

It looks like DaBaby is a doting father of two and soon will welcome another blessing in the world. To think of it, he surely is a protective father, and let’s hope he will be a great role model for his children.