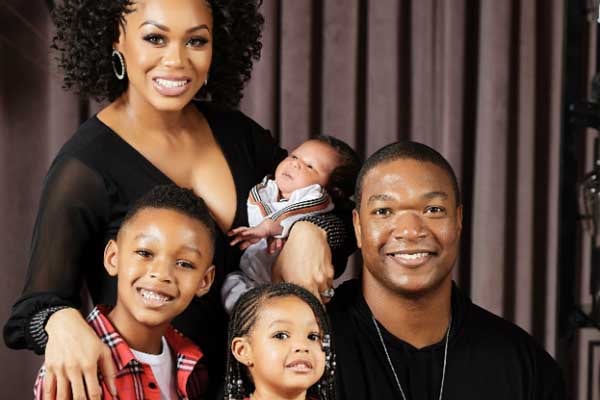 Monique Samuels one of the housewives of RHOP is a proud mother of three. Image Soource: Pinterest.

Did you know our favorite housewife from the reality Tv show Real Housewives of Potomac, Monique Samuels is a mother of three? She tied her knot with Chris Samuels, a former professional football player on March 8, 2012.

The pair welcomed their first child, a son named Christopher Samuels II, on February 1, 2013, and then a daughter named Milani Samuels in 2015. On November 26, 2018, Monique and Chris welcomed their third child, a son named Chase Omari Samuels. While in 2018, she suffered a miscarriage while expecting her then third child. That said, let’s get to know a little something about all of Monique’s children.

Christopher is the eldest amongst the three, and according to his Instagram account, he wants to become an Architect & Construction site owner. Yes, little Christopher has his own Instagram account, where nearly 2K people follow him. Well, it’s maintained by mommy Monique, but he sure looks handsome in the pictures his mother uploads.

Furthermore, like any ordinary kid, Monique Samuels’ son Christopher Samuels also loves playing with his siblings. They can be seen doing pretty much everything together from eating breakfast to watching tv, the brother-sister duo shares a lovely bond with one another.

Likewise, Christopher is also a great elder brother who takes really good care of his younger brother Chase. He adores spending time with him and also enjoys looking after him.

To fans of Monique, it must not come as a surprise that her daughter wants to be a model. It’s obvious that one day or another, she would have chosen the path of modeling as her mother herself belongs from that background. Like her elder brother, she too has her own Instagram account, and can you guess who runs it. If you have guessed her mother, then that’s the right answer. Her mother takes care of not only her Instagram account but also her hair and makeup. Looking at her pictures, we can say for sure she would make a wonderful model in the future.

As we have already mentioned that she is the only daughter of her parents. So, it’s obvious that she is her father’s little princess. Father Chris adores his daughter’s company and always accompanies her whenever she is out practicing ballet. Monique Samuels’ daughter Milani Samuels is not only a dancer but also a fighter. She is learning the art of self-defense, or you can call it Karate too.

Milani is usually accompanied by her father, but sometimes her younger brother can also be seen supporting his sister. The two share lovely brother-sister chemistry, and Milani just adores her little brother and why won’t she, he is so cute, fuzzy, and adorable, just like a baby Yoda.

The Youngest Amongst The Three

Chase Samuels is the youngest member of the Samuels family and the star of his mother’s eye. He is so adorable and cute that people instantly fall in love with him. Like his elder siblings, he also has his own Instagram account, and if you are interested in joining him on his journey, as mother Monique likes to call it, you can follow him there.

As we have mentioned earlier too that Monique Samuels’ son Chase Samuels shares a lovely bond with his elder siblings. In fact, he loves playing with them whenever he is not sleeping or doing typical baby stuff.

Hence, to conclude, Monique, the cast member of Real Housewives of Potomac and mother of three, is living quite a comfortable life with her better-half Chris and three gorgeous children.