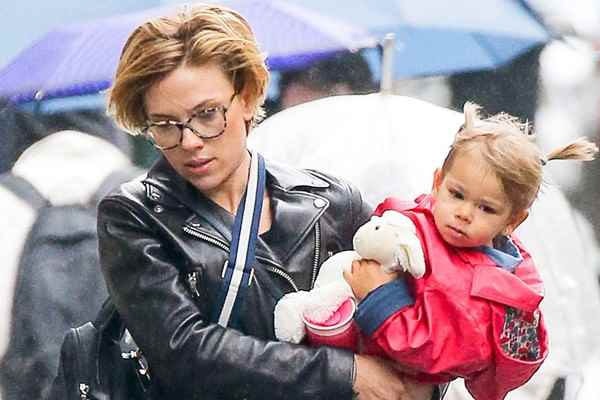 Mother Johansson and then-fiancé, Dauriac tied the knot in a low-key ceremony in Montana on October 1, 2014. However, the ex-partners ended their marriage after two years. The adorable little girl, Rose, is in her mother’s custody after the custody battle.

The relationship between the mother-daughter pair is intimate and strong. Furthermore,  Rose loves spending time with her parents. Likewise, Scarlett has opened up about motherhood in a heartwarming interview. The 34-year-old mother of Rose Durian describes her motherhood exhausting but in a wonderful way. Furthermore, the stunning mother jokes that she did not realize how much she liked sleeping through the night until she had her child.

The late night and early morning feedings provide a unique bonding experience for the daughter and the parents. Despite parting their ways, the former lovebirds, Scarlett and Roman, want the best for their daughter and have maintained a friendly relationship. The ex-lovers showed their cordial relationship as they reunited to take their daughter to the cinema.

Little Rose Thinks Her Mommy Fights People For a Living

The award-winning actress, Johansson might play Black Widow in the Marvel universe. However, according to the young Rose Dorothy, her mommy is always a superhero.

The Natasha Romanoff or the Black Widow, dropped by The Ellen DeGeneres Show to promote her new movie Avengers: Infinity War. In the interview, Scarlett told Ellen that her time and effort participating in the franchise had led her almost four years old daughter to believe her mom is actually Black Widow full time.

According to Scarlett, if asked on what her mother’s profession was, the little Rose is always quick to answer “a superhero”. Furthermore, the young daughter often asks who she is fighting and thinks pleather unitard is a regular uniform for Johansson to wear to work normally.

The beautiful name “Rose” is originally a Norman form of the Germanic name. The name is the combination of the elements “hrod” and “heid”. The meaning of the elements “hrod” and “heid” are “fame” and “kind, sort or type” respectively. The Normans introduced the name to England in the forms of “Roese” and “Rohese” and from an early date, the name is associated with the word for the fragrant flower, which is derived from Latin rosa.

The name Dorothy is an English name for a baby girl. The meaning of the lovely name “Dorothy” in English is Gift of God. Besides that, the middle name for Rose was in honour of Scarlett’s grandmother.