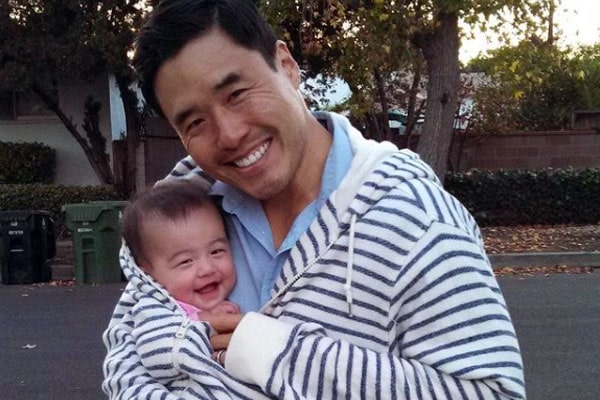 Randall Park is a famous American actor, comedian, and writer best recognized for playing the role of Eddie Huang‘s father, played by Louis Huang in Fresh Off the Boat. For his performance in the ABC sitcom, which aired from 2014-2020, Park got the nomination for the 2016 Critics’ Choice Television Award for Best Actor in a Comedy Series. Moreover, he also played Steve, a prank replacement of Jim Halpert in the 2012’s episode of The Office. Also, Randall Park served as a frontman for the Bay Area hip-hop/rock fusion band III Again.

Here, get to know a little more about Randall Park’s daughter, Ruby Louise Park, who debuted in the film industry at the age of one.

The celebrity couple, Randall Park and Jae Suh Park welcomed their daughter, Ruby Louise Park, in May 2012. Ruby is the first and so far, only kid of the Park couple.

Ruby’s parents, Randall and Jae Suh met at a non-profit theater fundraiser, for which her dad had contributed a hand-drawn cartoon of a squirrel with no hands. At first, Randall was too bashful to introduce himself at the fundraiser. However, luckily, he stumbled upon Jae Suh Park at an audition a few days later, where they chat about each other for several hours.

From that moment, Ruby Louise’s father and mother met each other on different occasions and eventually fell for one another. A year after they knew they were in love, Randall proposed to Jae for a wedding at Billingsley’s Steak House in West L.A.

Some years later, their adorable daughter, Ruby, came into their life.

Has Some Acting Credits To Her Name

Randall Park’s daughter, Ruby Louise Park, also has the acting skills which she inherited from her mom and dad. Moreover, being the daughter of famous entertainment personalities made her easier to enter the film industry. Ruby’s first appearance was in the 2013’s comedy web series Baby Mentalist as a crime-fighting baby superhero. Randall was the creator of the series, while he and his wife, Jae Suh Park, also starred alongside Ruby.


Later, the same year, Ruby Louise got to ‘act’ in the role of Baby Christine in the short film Flashbackattack. Moreover, Park is also known for her appearance in the 2014 action comedy-drama Fishbowls Are Definitely My Thing as Baby Mentalist.

However, lately, Ruby has not appeared in any TV series and films. It seems like her parents want her to focus on her studies at the moment. Moreover, she is only nine years old at the moment. So, Ruby still has a lot of time to prepare herself and decide her career path. We hope to see her soon shining out in her chosen career path shortly.

Usually Stays Away From The Public Gaze

Well, Randall Park’s daughter, Ruby Louise Park has grown up a lot now, and her mom and dad usually keep her pretty much away from the reach of media scrutiny. The celebrity parents want her to enjoy a normal life without being affected by unnecessary media dramas. Moreover, Ruby is too young to have social media accounts, and her dad, Randall, is not active on Instagram.

However, Ruby’s momma, Jae Suh Park, is active on her Instagram page. She has shared a couple of adorable pictures of her daughter, Ruby having daddy-daughter time with Randall. But, unfortunately, Jae also does not share many details on Ruby. So, there is still a lot to know about Randall Park’s daughter, Ruby Park.

At the moment, Ruby Louise Park is having a great childhood and enjoying every moment at her home in the San Fernando Valley.