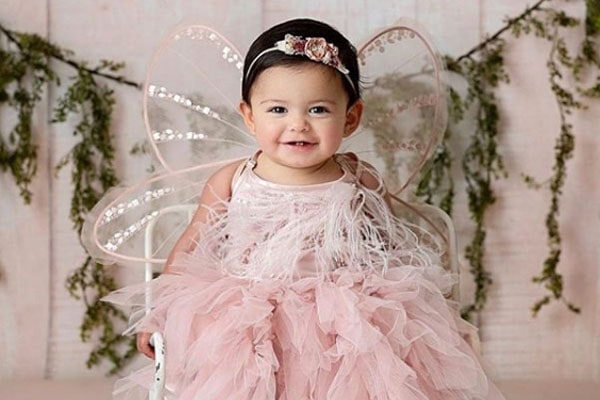 Rylie Garcia is Ryan Garcia's daughter with his baby mama, Catherine Gamez and was born on Mar 20, 2019. Image Source: ryliegofficial/Instagram.

Ryan Garcia is a talented professional boxer. He has held the WBC Silver lightweight title since 2019 and as of June 2020, he is ranked as the world’s fifth-best active lightweight by The Ring magazine. Well, talking about his personal life, Ryan became a father after his adorable daughter, Rylie Garica, came into the world on Mar 20, 2019, in Mexico.

By the time Ryan Garcia’s daughter was born, he had been quite successful in his career. He also said how Rylie’s birth is the most significant event in his life. Ryan loves his daughter and would do anything for her to make her happy.

Ryan also stated that he never knew what to expect before his daughter was born. He also said:

“I guess it’s cliché to say, but right when I saw her, I knew my heart belonged to her. There was nothing else in the world that mattered. She controls me now. She’s my queen.”

Going through Ryan Garcia’s Instagram, he often posts adorable photos of his daughter. The father-daughter duo look so cute in photos together. We can definitely say that Rylie is very fortunate to have such a loving and caring father. Ryan loves to be around his daughter, making sure that she is all happy.

Similarly, Rylie’s mom, Catherine, doesn’t hesitate to post photos of her with her daughter on her Instagram as well.

On Mar 20, 2020, cute and adorable Rylie Garcia turned one year old. Her dad, as well as mom, wished her on their social media handle. Although it was her first birthday, no huge birthday parties were planned. Ryan said that they had to cancel. But he will probably surprise Rylie with a grand surprise birthday party for his little princess.

Even if Rylie’s first birthday was a low-key one, she probably got tons of gifts from her family. Plus, Rylie’s dad must be providing her a beautiful and lavish life since Ryan Garica has a net worth of $10 million. Ryan is doing great as a father for sure.

Well, Ryan and his baby mama, Catherine, parted their ways after Rylie was born. They ended their relationship amicably and went to court to settle matters regarding child support. But other than that, both of them love their one and only daughter so much. They wish the best for their cute Rylie.

Made Social Media Debut Shortly After Her Birth

Ryan Garcia’s daughter made her social media debut shortly after her birth. Not only that, but she also has her own Instagram account with more than 34.2k followers. Rylie’s dad runs her social media handle. Her charming and mesmerizing cuteness is luring the hearts of many.

Rylie’s mom, Catherine, also runs an Instagram account by her daughter’s name and has more than 21.2k followers. So, in all, we can see that Rylie is a very happy child and enjoying her splendid life.

The name Riley means ‘brave’ according to the Irish origin and ‘rye clearing’ in Old English.