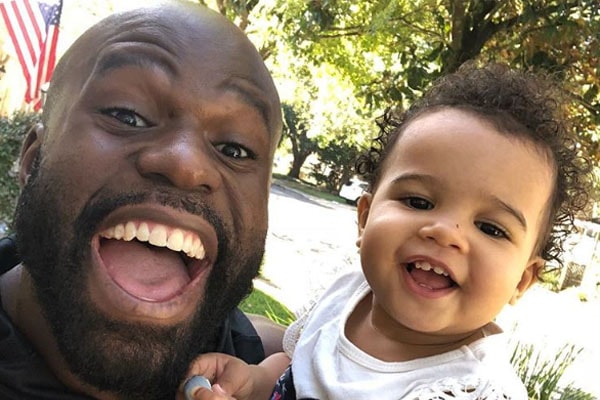 The WWE wrestler Apollo Crews‘ daughter Sade Sofiya was born on the 22nd of June, 2017. Till date, the cute Sade is the only child of Apollo Crews. Apollo had his daughter with his partner Linda Palonen.

Sade Sofiya being the firstborn of Apollo, the whole family was delighted to welcome a new member into their family. It was Apollo’s friend and fellow wrestler Moose who announced the birth of Apollo Crews’ daughter on his Instagram handle congratulating them.

It looks like Apollo Crews has already started training his daughter Sade Sofiya to be a future wrestler like him. The father-daughter pair of Apollo and Sofiya go on doing exercises together. They jog along and once awhile take a dance break too. All in all, despite being a hectic schedule, Apollo somehow takes out time for his little girl and tend to enjoy as much as he can.

Plus who knows that Apollo Crews’ daughter might also surpass him in the near future. If you are to check out Apollo’s social media handle, then you will find it filled with the videos and photos of his daughter. And we have to admit though; the little Sade is adorable too.

Sade Sofiya and her father Apollo Crews have a lot of fun when they are around one another. The 31-year-old wrestler Apollo Crews and his daughter Sade went as the character of the movie The Incredibles on Halloween, and they definitely rocked the outfit.

We know how much of a tough guy Apollo is in the ring, so in the coming days when his little one will grow, her dating partners will have a hard time facing her humongous dad. Apart from her father, Sade Sofiya also loves to have fun with her father’s fellow wrestling friends including Akira Tozawa, and No Way Jose.

The name Sade is of African Origin which means “honor confers a crown.”

As for the name Sofiya, it is a diminutive form of name Sophia which means wisdom and skill in Greek.