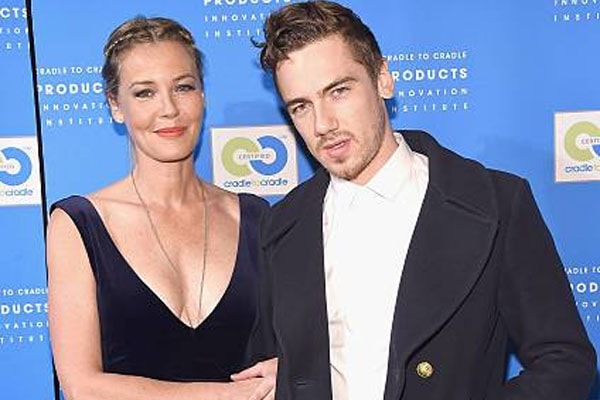 The Wonder Woman, Connie Nielsen‘s son Sebastian Sartor, was born on 27 November 1989. He is the first child of Connie Nielsen whom she had with her previous relationship with Fabio Sartor.

Sebastian Sartor has a half-sibling named Bryce Thadeus Ulrich who is twelve years old now. Sebastian is best known as a hip-hop producer.

The 29-year-old Hip-Hop producer has shown remarkable job in music records. He has been recording new music ever since he grew fancy towards music.

In the beginning, Sebastian had some problem acknowledging his work by people. He had worked in “King Push” album but no one knew he was the one. It was rumored to be Joaquin Phoenix. Well, it turned out that the mastermind behind the “King Push” was Connie Nielsen’s son Sebastian Sartor. His talent has paid off.

Check this out!  “Wings + Horns” Produced By Sebastian Sartor

Through his interest in tracks mixing and recording led him to further platform. He has featured in Tim Wicked as producer and many others. Sebastian is also involved in the band group.

Till to date, he has produced several songs and albums such as What They Know, October 4, Wings and Horns including Push T. Besides, Nevergettingbolder, Need That Now and Carnegie Hall are his latest instrumental work.

Besides his work, Sebastian loves to spend quality time with his mother. Connie has been unmarried throughout her whole relationship. She remained single after she split with Metallica’s drummer Lars Ulrich. Though she is practically alone, her son Sebastian supports her with his presence on many occasions. Recently, on Jan 24, they have attended the Premiere of TNT’s ‘I Am The Night’ at Harmony Gold in Los Angeles, California.

#iamthenight premiere LA thank you @maisonvalentino for the gorgeous coat accompanied by the most beautiful person on the planet, my son @sebastiansartor

Besides, the mother-son duo had been in Justice League Event together. Connie is delighted with her two incredible sons. She has shared in her Instagram page stating her sons as the best friends of a lifetime. It seems Sebastian Sartor keeps his mother Connie in the best care. On Mother’s Day, Sebastian made a memorable video expressing his love for Connie Nielsen.

Sebastian is a Latin baby name. It means Venerable and revered.