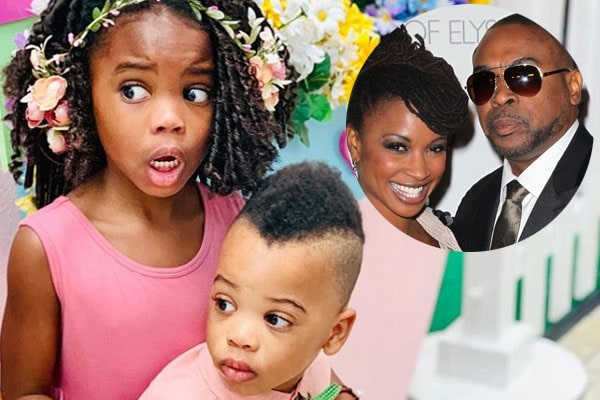 The gorgeous Shanola Hampton is a very talented actress best known for roles in Tv series and movies like Shameless, You Again, and Things Never Said. She tied her knot with her better-half Daren Dukes on 11th March 2000. The lovely pair is proud parents of two children, Cai MyAnna Dukes, and Daren O.C. Dukes.

Shanola gave birth to her first child when she was 36 years old and to her second when she was 38. She says that her two little kids have changed her life and made a better person. So, let’s get to know more about the lovely kids of Shanola and her beloved husband, Daren.

Shanola Hampton’s daughter Cai MyAnna Dukes was born on January 20, 2014. And according to an article published by People, her daughter weighed in at 6 lbs., 3 oz. and measured 20 inches in length at the time of her birth. Shanola also mentioned that she and her husband never knew how much was missing from their life until their baby arrived. Shanola ended by saying that she was so lucky and overjoyed as well as blessed from the arrival of her daughter Cai.

Furthermore, mom Shanola loves taking her daughter hiking, where her father, Daren usually carry her. Not only that, Little Cai often visits her mom on her movie set and likes spending time around the cast members. The gorgeous duo of Shanola and daughter Cai loves spending time playing with colors and, at times, swimming in the pool. However, there are times when dad Daren and brother Daren join the two of them, and the four of them usually sit around sharing a couple of chats.

Plus, Shanola loves sharing every small detail of her daughter’s life, from her stealing her first cookie to her becoming a flower girl for the first time, Shanola likes celebrating it all. We can say her daughter holds a special place in her life.

Born on May 9, 2016, Daren O.C. Dukes brought a different joy in the lives of Shanola, her husband, and daughter Cai. The charming couple got a baby boy, and little Cai got a brother to play with. It’s something different, it’s something special that Daren has brought onto our lives, says mom, Shanola. When talking about baby boy Daren we can’t discard father Daren, like the name they have a lot similar going on. Shanola Hampton’s son Daren looks a mini version of the older Daren; maybe that’s why they named him Daren. He has inherited his father’s charming nature that we can clearly see in the side by side comparison picture below.

In addition to that, little Daren loves playing drums, which his father has uploaded on his Instagram page. They not only play together but travel together. When mom Shanola is busy with her acting business, father Daren takes care of the two children. He takes them out to play on beaches, parks, get them ice-cream and take them to see their grandparents. In fact, baby boy Daren adores his grandfather’s company.

The lovely family of four usually spend their free time having either by doing something interesting like traveling, watching movies, or just enjoy a pleasant day. Nonetheless, the family also celebrates Christmas with a grand boom dressing up all in green and goofing around. Cai and her baby brother Daren love cooking for their parents, most of the cooking is done by their grandparents, but they help too.

Speaking of father Daren, he has his own YouTube channel named thedallascowboyshow and his nearly 39k followers. We can say he is a YouTube celebrity as well.