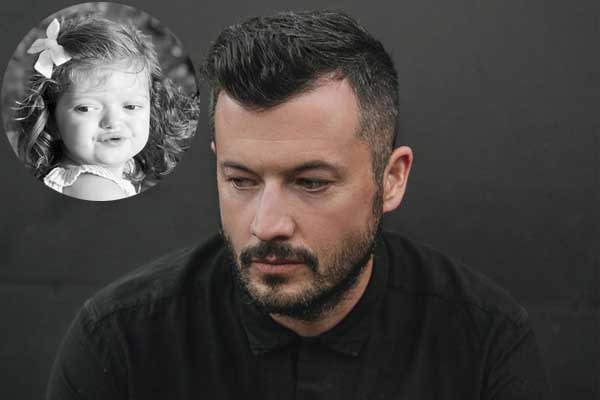 Josephine Fennell is the daughter of the singer Brian Fennell aka SYML. Image Source: Pinterest.

Who is SYML’s daughter? Before answering that question, let’s get to know a little something about our favorite singer, SYML. Born as Brian Fennell, SYML released his eponymous debut album through Nettwerk Records on May 3, 2019. He has been enjoying his marital life with his better-half, Marion Fennell, since September 9, 2012. Together the married couple has two lovely children, a son, and a daughter.

Brian Fennell’s daughter Josephine Fennell also referred to as Josie, was born on November 23, 2016. Furthermore, with a voice as sweet as honey, SYML has even dedicated a song to his daughter, which reflects the pain and suffering she had gone through as well as an immense pain a father felt as he saw his daughter undergo surgery. What’s the song, and what did little Josie suffer from? Don’t worry, if you don’t know the answer, we are here to answer that for you.

Brian and his wife couldn’t be happier when they welcomed their second child, a daughter. However, things took a harsh turn for the singer as SYML’s daughter was diagnosed with a disorder that restricted the development of her brain. It was all because of her skull being fused too soon.

Luckily, they caught it at a good time, so her development was still on track up to that point. But little Josie desperately needed to undergo surgery in order to let her brain grow to its full potential. Well, Brian explained the build-up leading up to that surgery was the most intense thing he and his wife had ever been through.

Though the path seemed difficult, he always had the love of his life beside him. Marion constantly supported her husband and never left his side. Her nurture and care healed their daughter back to her full health. So, as a means of showing gratitude to his better-half, Brian posted a picture of his wife and daughter mentioning how lucky they were to have her also wishing her a happy mother’s day.

A Song To Sing

The first time Brian ever wrote a song was to process the death of his friend and to deal with the anxieties that came with his daughter undergoing surgery. However, that’s not the only reason he wrote the song Girl. Brian Fennell, aka SYML, wrote the Girl for two specific reasons. Firstly, it was a simple way to skip reality, it was a therapy for his family as they went through their daughter’s condition.

Another reason for Brian to write the song was to serve as a bit of a letter to his daughter to have when she grows up so that she could understand the immense pain she underwent. Also, to make her know that it was an essential part of who she is and how much of a strong person she is for enduring it.

Brian further explains that people both young and old will go through life-changing experiences, some painful, some not, some big, some small, and it almost seems supernatural that we as humans are capable of going through that. On the other hand, it seems totally natural that we put our heads down and we do it, it’s just the wildest thing that we as a human being are capable of.

Last but not the least, Brian’s favorite line in the song is, “Sometimes, our bodies will hurt for some time, and the beauty in that can be hard to find, but I want you to find it.” It’s something people find difficult to understand that life without pain is meaningless and enduring it with people you love, that’s where the beauty of pain lies in.