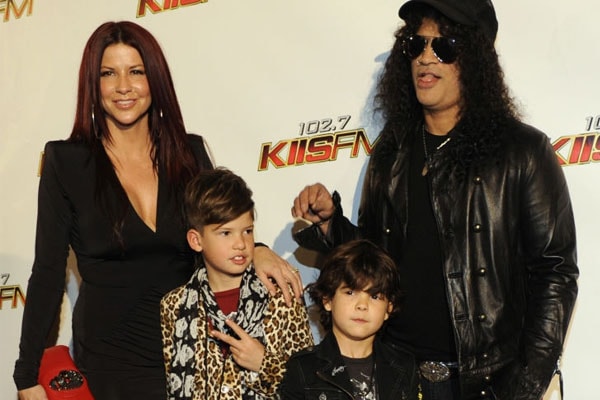 Slash is a proud father of two children. Slash’s children include two sons named Cash Anthony Hudson, and London Emilio Hudson. He had his two kids together with his ex-wife Perla Ferrar. The former couple got married back in 2001. Unfortunately, things didn’t go well between the two and the exes got divorced in 2018.

Saul Hudson aka Slash is an American-British musician and songwriter best known as the lead guitarist of the American hard rock band Guns N’ Roses. Whereas Slash’s second ex-wife, Perla is an American descendant, born on the 14th of March 1975. The ex-pair tied their wedding knot in Hawaii, US.

Cash Hudson was born on the 23rd of June 2004 in Los Angeles, CA. He is the youngest member of his family. He has an older sibling brother named London. London is a year older than Cash.

Guns N’ Roses’ guitarist, Slash’s son is mostly away from the media limelight. Nevertheless, Cash’s mother Perla is busy sharing his pictures on her Instagram handle. She wants her son to be a good future father, husband, mentor, leader, and ultimately a loyal global citizen. It seems as if the mother and son share quite a strong bond together. And Perla makes sure to wish her son whom she refers to as Lil Monkey, on his birthday.

As of 2019, Cash is 15 years of age and is currently in his high-school. However, details regarding his schooling have not been revealed yet.

London Emilio Hudson Went On To Follow His Father’s Footsteps

The eldest son of Slash, London Hudson seems to be very inspired by his father’s successful musical career. He was born on the 28th of August 2002 in LA, California. It looks like he connects with the beat and rhythm quite easily. Ultimately, London started off his career as a drummer. He performed with his band titled Classless Act on his very first public show event at Whiskey A-Go-Go in 2018.

Also, London has an Instagram account with 29K followers. Going through his Instagram handle it is clear that he enjoys his leisure time traveling to beautiful locations.

There is no doubt that London is following his father’s footsteps. Who knows, we might see more of him in the coming days. London is also a skateboarder who has ridden for Focus Apparel. His father’s Slash rose to international acclaim as an energetic guitarist during the 1980s. And in 2005, Slash won the title of Best Guitarist in a survey conducted by Esquire Magazine.

London Emilio Hudson: London is a place name that is the capital city of England. The name provides the meaning of a “place at the navigable or unfordable river.” The middle name, Emilio is a masculine given name of Italian, Spanish origin meaning “rival.”