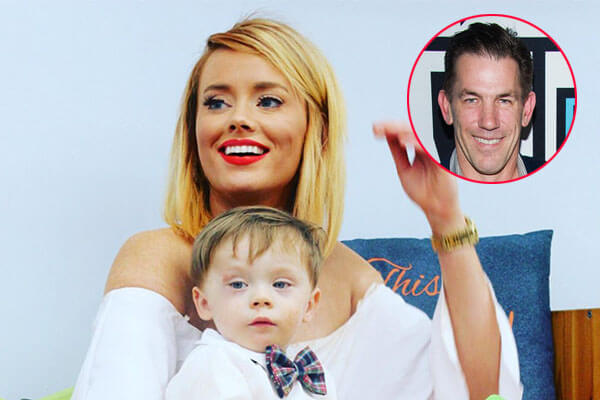 Kathryn Dennis‘ son St. Julien Rembert Ravenel was born a healthy and happy child. He was born on November 9, 2015. Julien is his Kathryn’s second and the youngest child with her baby father, Thomas Ravenel. With her ex-partner Thomas, she also has a daughter, Kensington Calhoun Ravenel, born on March 24, 2014.

Julien Rembert Ravenel is a healthy and happy child. Recent updates tell that Kathryn is fighting a nasty battle over her children’s physical custody. The mother of two is hoping that the judge rules against her ex-boyfriend Thomas’s custody request. The boy’s father, Thomas, allegedly made abusive comments about his ex-girlfriend Kathryn.

At birth, St. Julien Rembert had fluid buildup behind his eardrums. Due to this, he had a slight hearing problem, which affected his speech. As a result, Kathryn’s son reportedly wears ear tubes in his ears to fix the minor issue.

Previously, there were rumors that he was born with developmental disorders and had behavioral problems. However, Julien’s mother Kathryn confirmed that her baby son is perfect and growing up well. Kathryn’s 830K plus followers, as of June 2019, on Instagram also support her and her two wonderful children.

After going through Julien’s parents’ history, it reveals the fact that he went through a lot. Apart from his slight hearing inconvenience, he also had to go through a family issue. Undoubtedly, that is a terrible experience for the kids. But it’s a relief that Kathryn is a strong mother and is ready to die for her children’s safety and happiness.

As of June 2019, Julien Rembert’s parents’ are going through a controversial court battle. The parents of two are reportedly fighting for the sole physical custody of their children. Likewise, Kathryn claims that Thomas often criticizes her being an alcoholic and a drug addict. However, she assures the public that she has left her dark past behind her. Also, Julien Rembert still loves his father despite his occasional bad behavior.

Furthermore, Julien’s parents didn’t have a healthy romantic relationship, as they often fought over trivial matters. There was also news that Thomas sent abusive texts to Kathryn, accusing her of cheating and blaming the family issues on her. Despite the former lovebirds’ notorious history, they fulfill their respective roles as loving parents.

St. is an abbreviation of the name Saint, which means “sacred, holy.” Julien comes from the Roman family name, Julianus, which means “downy-bearded” or “soft-haired.” Rembert is a German origin name that means “bright, famous.”