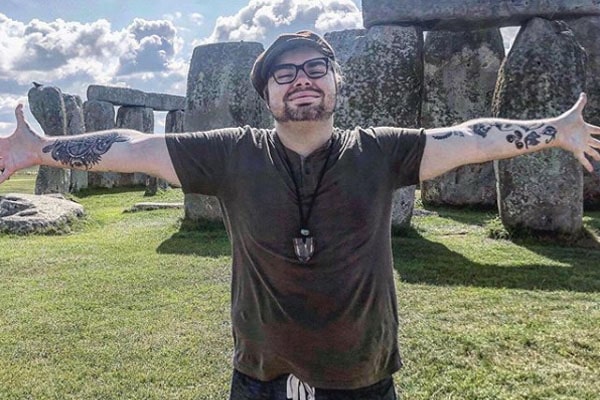 Born in 1990, Dylan Bauer is Steven Bauer‘s son with his ex-wife, Ingrid Anderson. Talking about Dylan’s parents, they married each other in 1989 but divorced each other after two years in 1991. Dylan’s dad, Steven Bauer, is a Cuban-American actor. Similarly, his mom is also known for her work on Hercules, Cover Up, and Riptide.

Dylan Bauer has an elder half-brother named Alexander Bauer. He is Steven Bauer’s son with his ex-wife, Melanie Griffith. Many of you are probably not familiar with Steven Bauer’s son Dylan. So, to know more about him, do catch up with this article until the end.

Dylan Bauer Is A Professional Witch

Steven Bauer’s son, Dylan Bauer, did not follow his dad’s footsteps but chose a very different and unique career. He went on to become a professional witch, according to his Instagram’s bio, instead and goes by the name ‘Mystic Dylan.’ He always had an attraction to mysticism.

Dylan’s connection to mysticism and love for knowledge made him what he is now. It allowed him to study, explore, and dedicate himself to the art of Witchcraft, as well as Hoodoo, Root-work, and Shamanism. He also uses the craft to assist him in both personal and professional life.

Dylan Bauer also has an Instagram account with over 19.5k followers. He often posts his witchcrafts and Hoodoos. He certainly is building an empire from his career.

‘Mystic Dylan’ And His Earnings

Dylan Bauer also has his own website called ‘Mystic Dylan.’ If you’re interested, you can check the site as well. You can also book Psychic readings and Spellwork classes. The introductory reading costs you $45 for 15 minutes, half session reading is $90 for 30 minutes, and the full session is $150 for an hour.

Similarly, the witchery works such as Space Cleansing and Custom Spellwork have $200.00 and $150.00 rates, respectively. Dylan probably gets to teach a bunch of interested students as well. We assume Dylan Bauer’s income and earnings as a professional witch is promising.

Similarly, the website also sells some of the products that are related to the art of Witchcraft. Some of then with their respective price tags are listed below:

So, as a professional witch, Dylan Bauer, aka Mystic Dyan, is apparently making a great career and fortune. Not forgetting his YouTube channel, Dylan also likes sharing his Witchcraft on YouTube.

However, it has been over six months that he has not uploaded any new videos. But he might be occupied with his works at the moment.

Furthermore, Dylan is also one of the co-host of The Witch and The Medium podcast, and a co-creator of III Crows Crossroads.

Even though Dylan Bauer became a professional witch, his dad, Steven Bauer, has always been supportive. The father-son duo has a great bond and connection. Steven is always there to help his son. Dylan posted a photo of him with his dad on Father’s Day on June 22, 2020.

He captioned, saying that he is thankful to his dad for being a supportive dad and accepting him as he is. We hope he also has got a great blond with his half-brother Alexander Bauer.

As for his love life, it pretty much looks like he is not in any kind of relationship. Perhaps Dylan Bauer is more focused on himself and his career.

According to Welsh origin, the meaning of the name, Dylan, is ‘son of the sea.’