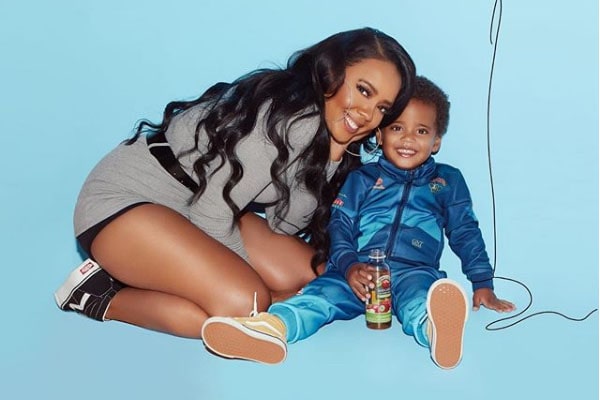 Angela Simmons is an American TV actress, shoe designer, and doubles as a businesswoman. Well, going through her personal life, she is mother to her adorable son, Sutton Joseph Tennyson, and was born in 2016. As for Sutton Joseph’s dad, Sutton Tennyson, he died on November 3, 2018, after fatally being shot 13 times.

Sutton Joseph is currently living a splendid life with his mom. Similarly, Angela, as a single mom is wonderfully taking care of her son and loves to be with Sutton Joseph all the time. Now, let’s not waste any time and get to know more about Angela Simmons’ son.

Also Read: Both Of Ryan Calhoun’s Children Whom He Had With Chrissy Calhoun

Since the news of Sutton Joseph’s dad was devastating for the family, Angela Simmons had to go through some rough times for sure. She even misses her ex-fiancé at times. Well, Angela Simmons’ son reminds her of Sutton Tennyson because her son not only looks like his father but also behaves like him.

Angela shared a video to prove how much her adorable son acts like his late father on her Instagram account. She captioned it saying, Sutton Joseph wanted to lint roll his outfit by himself which she found very cute. Also, she added ‘His dad was very particular when it came to clothing and lint rolling.’ Angela has seen so many things in her son that reminds her of Sutton Tennyson.

Even though Sutton Joseph has his mom by his side, he may be missing his dad too. Angela’s baby father was shot and killed in an Atlanta parking garage in November 2018. Simmons even reported that she felt ‘numb’ after hearing the news. However, she has moved on with her life and is living a happy life with her son at the moment.

Sutton Joseph And His Splendid Life

Angela Simmons’ son, Sutton Joseph is blessed to have an amazing and splendid life since Angela Simmons’ net worth is about $7.5 million. Going through Simmons’ Instagram Profile, it’s jacked up with her son’s photos and snaps. The lovely mom-son duo loves spending time together and we can clearly see the happiness and joy on their faces as well.

Angela likes dressing up her son, Sutton Joseph with expensive and attractive outfits. She is providing him a lavish and splendid life just to see the glowing smile on her son’s face. The small boy is getting lots of love from his momma. The mother-son duo has a strong bond and connection with each other. They love cherishing each other and it’s so cute to see mommy and son as the best buddies.

And we assume, Sutton Joseph is currently studying in a reputed school. Therefore, Angela is doing the best she can to make her son happy every second and raise him to be a very good man. We hope the lovely pair of mother and son have the same happiness forever and ever.

The name Sutton is of Old English origin and the meaning of Sutton is ‘southern settlement.’ Joseph came from the Hebrew origin, meaning ‘May Jehovah add/give increase.’