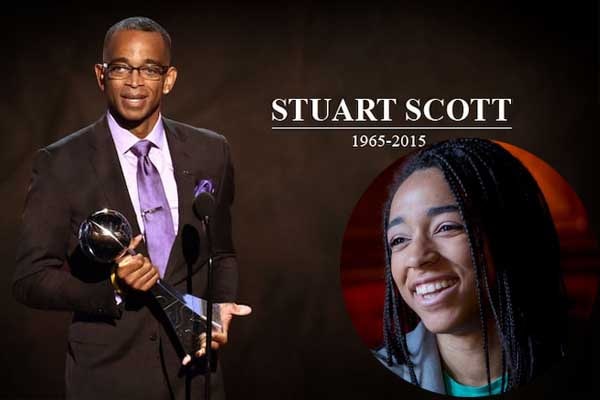 Stuart Scott is the daughter of the late Stuart Scott. Image Source: Pinterest.

Born as Stuart Orlando Scott, Stuart was an American sportscaster and anchor on ESPN. He is still remembered for his hip-hop commentary, catchphrases, and good deeds. He was married to Kimberly Scott from 1993 to 2007, and during that time, he fathered two daughters. However, at the time of his death, Stuart was in a relationship with Kristin Spodobalski.

Stuart Scott’s daughter Sydni Scott was born on October 20, 1999, and Taelor Scott was born on February 21, 1995. After the unfortunate passing of Stuart on January 4, 2015, his two daughters have stepped ahead and contributed to The V Foundation. They were quite close to their father and were devastated after his death. In fact, everyone who knew Stuart was devastated, hearing the news of his passing was not easy. But with the support of fans, friends, and family have helped Stuart Scott’s daughters to cope with their loss.

Sydni Scott graduated from Columbia College in political science, and like her father, she is really into sports. She recalls when she was small, her father used to come to see her every soccer match. Soccer without dad was like bread without butter. Stuart used to encourage her even if she had lost. Sydni says her father was the greatest father ever.

Stuart Scott’s daughter Sydni Scott remembers growing up around her father was the coolest thing ever. She stated that her father used to buckle her into the backseat of their car and take her to the soccer match. At that time, her legs were not long enough to touch the floor and her arms pressed under the giant seatbelt, she looked like a small teddy bear seated beside her papa bear.

Sydni also recalls the song her father used to play in their car. They listened to the same song time and again, Rocky. Even when her hands reached the radio, the song never changed and remained the same throughout the drive.

Songs there were a lot of songs, songs that were vaguely associated with the movies Stuart liked. Even now, when Sydni closes her eyes and put on her headphones, those same thrumming notes pour out. And she recognizes that these songs are pieces of Stuart, which he left behind for her.

Sydni Scott is a gorgeous woman with a kind heart; maybe that’s why she makes friends wherever she goes. Especially while she was studying at Columbia College, she made a hefty load of friends, but amongst them, one stands out, William Richard Joseph Fellows.

Well, he is Sydni Scott’s boyfriend, and the pair is currently dating. The couple looks lovely together and has overcome a lot of things, most importantly their language barrier.

Speaking of her elder sister Taelor Scott, both the sisters are really close to one another. After their father’s passing, the two have been heartbroken, and at that time, they had no one else but themselves. However, later on, many friends and other family members showed up and supported them, raising them from their misery. Now, after going through so much together, the sisters’ duo is closer than ever.

After the Passing Of Stuart

As addressed above, both of Stuart Scott’s daughters were really close to him, and he also shared a special relationship with his daughters. So, after he lost his long battle with cancer, his two daughters were broken in pieces. At the moment of crisis, the one who should have been supporting them came out as villains. Her two aunts Susan Scott and Charles Silver, refused to give them their share of their father’s trust.

So, as a last resort, both the sisters sued their aunts. They claimed the co-trustees have failed to do their job on multiple occasions, including not yet creating an official estate or properly accounting for $800,000 worth of assets. Sydni and her sister Taelor also claimed that the check they signed for their mother Kimberly also bounced. And the worst thing about the whole thing was when Sydni and her sister asked about the financial support for college, and the trustees told them to get a job.