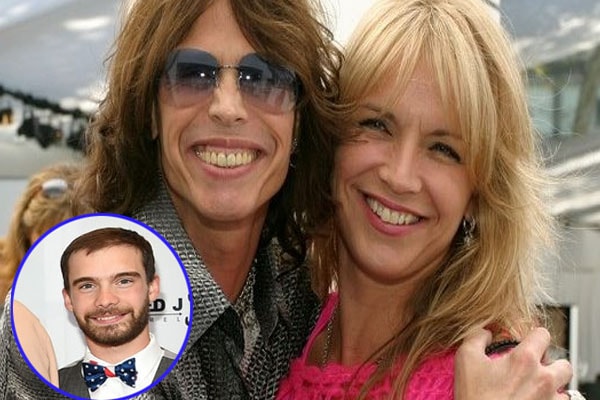 The American singer and songwriter, Steven Tyler‘s son, Taj Monroe Tallarico was born on January 31, 1991. He is the only son Steven had had with his ex-wife Teresa Barrick. Taj’s mother, Teresa Barrick, is a fashion designer. Due to some problems, his parents decided to move apart in 2006.

Taj Monroe has an elder sister named Chelsea Anna Tallarico, who was born in 1989. He has also got two half-sisters named Liv Tyler and Mia Tyler from his father’s previous relationship. So, let’s get straight down and know more about Steven Tyler’s son, Taj Monore Tallarico.

Taj Monroe Tallarico Shares A Loving Bond With His Father

Taj Monroe has been a familiar face to the media spotlight since young. He has attended many celebrity awards and events with his father to honor his father’s achievement. Despite that, there are no much details about Taj Monroe.

However, on his each birthday celebration, we get a memorable glimpse of Taj, getting a birthday wish from his dad. The pictures below, of him with dad has been set up in such a way that it marks Taj’s Journey to adulthood and the father-sons loving bond.

Since he has been spotted many times with his father, it makes us pretty sure that Taj loves traveling by the side of his father. Ther father-son duos were once spotted attending Red Sox Game, and during the big events, Taj appears with his sisters’ group.

He has appeared on many red carpets with his sisters, and during one such red carpet event gave us a rare chance to know that he is growing up well among the talented siblings. His half-sister Liv Tyler is an actress, and Mia Tyler is a model.

Steven Tyler’s son, Taj Monroe also shares a close bond with his sister, Chelsea, and half-sisters, Mia and Liv since he grew up with them. So, in all, Taj has a great bond with his family members.

Taj Monroe Has Been An Actor Once

The 28-year-old, Taj Monroe has a normal profile despite being the son of famous singer Steven Tyler. He has appeared in the movie, Lizzie McGuire. Since then, he hasn’t taken any roles in movies, and there is also no news about his film projects in the future.

He seems to have left off the acting career. But still, besides known as Steven Tyler’s son, he is also introduced as an actor. His first movie has got eight wins and 20 nominations.

According to AmoMama, Steven Tyler’s son is a record producer and songwriter and has a promising net worth $1 million. However, unlike his dad, Taj maintains to live a low-key life but shows up on the red carpets to support his dad.

Similarly, it’s hard to know whether handsome Taj is in a loving relationship or not because of his subtle life. Even if he is in a relationship, his partner must be very lucky to have him as a partner.

Taj is the Indian word, which means Crown. The name Monroe is a Scottish surname meaning  “the mouth of the Roe.”