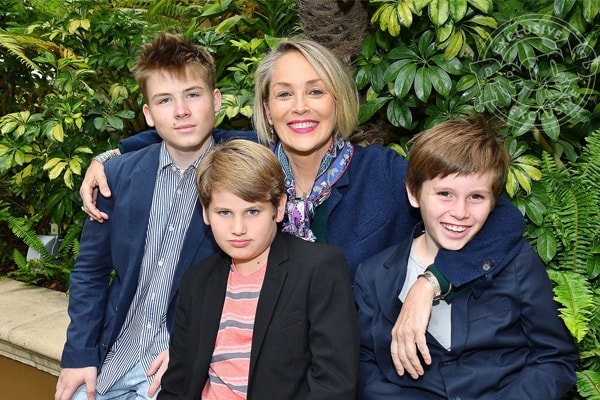 The American actress, Sharon Stone has three adopted sons: Quinn Kelly Stone 12, Laird Vonne Stone 13 and Roan Joseph Bronstein 18. Like other celebrities, she didn’t have a stable married life. Despite the fact, she is blessed with these three adorable sons.

Sharon had life’s most dreadful experience during her lifetime. She had only a 5% chance to live as she was hospitalized for subarachnoid hemorrhage back in 2001. Due to her life-threatening illness, she decided to stay off-screen for quite a long time.

Sharon Shares A Loving Bond With Her Sons

The Oscar-nominated actress, Sharon is a single mother. She had gone through lots of ups and downs throughout her life. People used to call her ‘damaged goods’ when she didn’t show up. However, these kids gave her the hope to live her life happily, and they made her house more cheerful and live.

Sharon loves to hang out with her sons. She has taken her whole bunch of family to visit Alaska. She had also been there with her sons during the Mother’s Day Luncheon. Sharon Stone’s three kids presented her with Mother of the Year Award. Plus Quinn and Laird even made an emotional speech stating she has been the most loving and caring mother for them.

Sharon Stone’s struggle wasn’t over yet. She was locked in a dramatic custody battle over her child, Roan for ten years with whom she had shared with her ex-husband Phil Bronstein. Even though she lost her battle, she paid her best wishes for Roan’s18th birthday.

All three sons of Sharon loves her boundlessly. They surprised  Sharon on her 60th birthday with lots of balloons.

The 60-year-old, Sharon Stone rarely shares pictures of her with sons on her Instagram and social media. Even though Sharon attends events and different award functions with her sons, she tends to keep her kids away from the media spotlight. And when Sharon brought her children to the limelight during a red carpet event, it gave us a rare chance to see her sons growing up well.

And once Sharon’s eldest son Roan said he wouldn’t take dating advice from his mother.

Despite her struggle, Sharon has taken role after role in many series and movies-her latest TV series is Mosaic and she has been featured as Olivia Lake. She is also a great single mother who has such courage to do it alone and the love to always put her children ahead.

The name Quinn is derived from Irish. It means ‘wisdom, Intelligence.’ Laird is originated from Scottish meaning ‘Lord of the land’ and Roan is used as a surname which means ‘raven.’