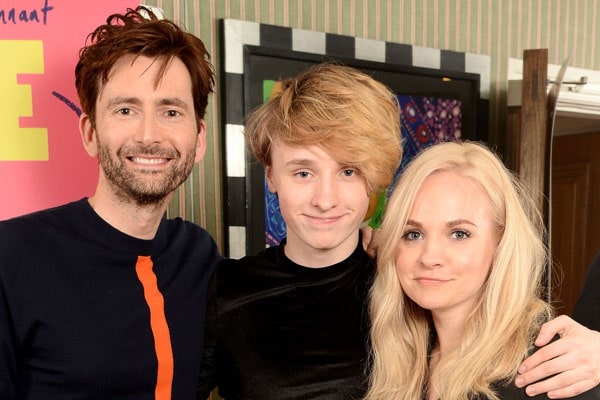 Georgia Moffett‘s son Ty Tennant was born on March 27, 2002, as Ty Peter Moffett. Just like his parents, Ty is also involved in the show business. In fact, he made his debut in the U.K. medical drama Casualty.

Ty is the adopted son of David Tennant and he was adopted after David married his present wife, Georgia. Besides Ty, the couple has four kids. He is really active in public platforms; he likes to keep the public updated about his personal life. Despite being the son of a really wealthy person, Ty likes to keep it simple and play cool. Let’s see what we know about him.

David Tennant’s son Ty Tennant is also an actor just like his parents. His father played the role of the timelord in Doctor Who TV show. Well, to be the fact it’s Ty’s family legacy is to be the part of Doctor Who TV show. His grandfather Peter Davison became the Fifth Doctor in 1981. Moreover, his mother, Georgia, has also appeared in the 2008 episode The Doctor’s Daughter, playing the Timelord’s cloned daughter Jenny. So, we are excited to see Ty be a part of the show acting beside his father, David.

Talking about Ty’s father David, he is not only known for his role in the TV series Doctor Who, but he has also appeared in numerous other movies and Tv shows. As for his net worth, it is estimated to be $7 million.

Furthermore, in an interview in The Graham Norton Show, David said that Ty lectured him about the upcoming baby. He said that when he and his wife told Ty about having a new baby, his reaction was, ‘You’re having another one?’, which is hilarious.

David said that it’s bizarre getting lectured from his 17 years old son. Moreover, his son was like ‘Come on, do I need to teach you the basics?’ and later on, it was like a horror show.

Life Behind The Screens

Georgia Moffett’s son Ty Tennant lives quite an ordinary life. Despite his popularity which seems to be increasing day after day, he is a really down to earth person. He loves hanging out with his friends, family, and is really into music. In fact, he uploads pictures and videos of him and his friends playing instruments and singing.

Regarding his acting career, Ty started with Casualty but his true claim to fame came with the movie Tolkien where he played the role of younger Christopher Wiseman. Ty was spotted celebrating his first movie premiere with his father, David.

Well, we can say that the father-son duo of David and Ty shares a lovely bond which we can clearly see in their photos.

Ty Tennant’s girlfriend Lola Thatcher was also spotted beside him during the premiere of his first movie. Well, to be exact she was looking gorgeous and no wonder the two are so much in love with one another. Their passionate love can be seen clearly in their photos.

Furthermore, Ty has also uploaded pictures of his beautiful partner Lola and there too we can see the lovely chemistry between them. In fact, the couple looks great together and seems like they are made for each other.

Plus, Ty’s mother, Georgia, was really excited to see her son on the big screen and tweeted that she was really proud of him.