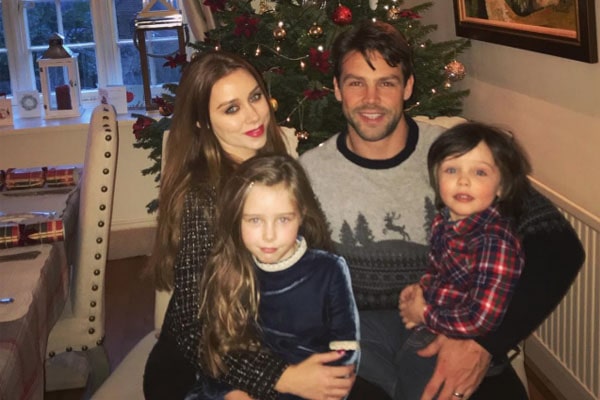 Irish singer, Una Healy is a proud mother of two children. She had her two kids together with her former husband Ben Foden. Una Healy’s children include a son Tadhg John Foden; and a daughter named Aoife Belle Foden. The former couple tied the wedding knot in 2012. However, the exes got divorced in 2018 due to some unfortunate circumstances.

Una Healy born as Una Theresa Imogene Healy on the 10th of October 1981 is an Irish singer-songwriter, musician and television presenter. She is best known as a member of the five-piece girl group The Saturdays.

Una Healy’s Daughter Was Born In 2012

Aoife Belle Foden was born in the same year her parent’s tied the knot. Singer Una Healy’s eldest child Aoife was born on the 13th of March 2012. Back in the year 2013, Una celebrated her first birthday along with her parents.

Aoife’s parents were very much delighted to welcome their first child together. Ben almost cried when she first saw his daughter Aoife. Obviously, any parents’ heart will melt when they have their first child. Same as that Una’s heart bursts with love for her only daughter.

Aoife Met An Accident And Got Injured

Unfortunately, Aoife got injured in a freak accident in January of 2018. Her mother Una, the Irish singer, revealed the scary news via her Instagram post. Aoife tripped and chipped a bone in her elbow that ended up requiring surgery.

Fortunately, everything went fine and the surgery was operated successfully. The mother of two also appreciated and thanked the care staff at Northampton General Hospital and Children’s A&E.

Tadhg John Foden Is The Youngest Member Of His Family

Ben Foden’s son Tadhg John Foden was born on the 2nd of February 2015 at exactly 12:30 pm. Tadhg’s mother Una along with her The Saturdays bandmates had celebrated a baby shower for him.

It is very obvious that Una along with her two children is enjoying their life to the fullest. All three are strongly bonded and happy being alongside each other in thick and thin.

Tadhg John Foden: Tadhg is a masculine name of Irish origin meaning “poet.” Also, John is a male name of Hebrew origin providing the meaning of “God is gracious.”

Aoife Belle Foden: According to the Irish legend myths, Aoife is the name of a warrior princess meaning “beauty.” Whereas, Belle is a universal name of French origin meaning “beautiful.”