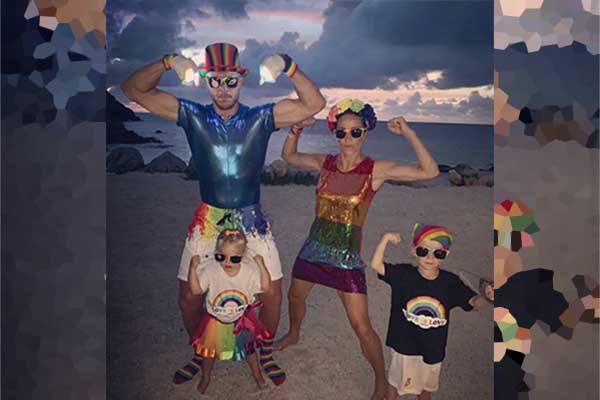 Natalie Pinkham is a familiar name in the sports journalism sector. She is best recognized for covering F1 stories and races on Sky Sports F1. In addition, she previously worked as the pit lane reporter for BBC Radio 5 Live in 2011.

Like her professional career, the television presenter has enjoyed success relationship-wise. She is happily married to British television executive Owain Walbyoff. Furthermore, the couple dated for several years before tying the knot in a romantic Portuguese ceremony in 2012.

The F1 reporter has given birth to two adorable kids from her marital life. So, let’s meet Natalie Pinkham’s children, Willow Mirela Walbyoff and Wilfred Walbyoff, and look at how they are growing up in this article.

Wilfred Walbyoff Is The Eldest

Natalie Pinkham’s son, Wilfred Otto Walbyoff, was born on the 17th of January, 2015. He was born after the three years of his parents’ wedding. In addition, he is lovingly called Wilf by his family.

The journalist announced she was expecting her first baby in July 2014. Although she was overjoyed after learning about the first pregnancy, it didn’t go as smoothly.

Natalie’s little one, Wilfred, was born six days earlier than the due date and delivered through an emergency C-Section. Both mom and baby’s lives were in danger at that time.

However, the troubles didn’t end there, and the F1 reporter experienced postpartum pre-eclampsia. As such, she had to stay in hospital for ten days. Thankfully, she recovered and returned to work when her son, Wilfred, was six weeks old.

Being a son of a renowned media personality, Wilfred is undoubtedly growing up in a good environment. Therefore, he must have a good education and other luxuries at his disposal.

Natalie Pinkham’s son, Wilfred, often accompanies her on travels and to her workplace. As per several sources, he has traveled to many countries alongside his parents.

Also Read: See How Peter Seidler’s Children Are Growing Up

However, the same couldn’t be said for Pinkham. She was hospitalized a week before her delivery date after developing a high temperature. In addition, she had to undergo C-Section to give birth to her daughter.

Like her first pregnancy, the television personality suffered from post-birth pre-eclampsia. She also developed post-operative ileus and lost lots of weight. Furthermore, Pinkham had to be hospitalized with an IV drip to keep her dehydrated. Thankfully, she recovered and returned to her original health.

Willow Was One Of The Twins

Natalie Pinkham’s daughter, Willow, wasn’t the only one she was expecting during her second pregnancy. She was pregnant with twin girls during the second time.

Sadly, the pit lane reporter had troubles in the earlier months of pregnancy. The doctors later told her only one baby out of twins would survive. As such, Willow lost her twin sister before she was even born.

Pinkham’s mother and great-grandmother had also lost their twin siblings. Nonetheless, she feels blessed to have a lovely little girl, Willow, who brightens her days every day.

Natalie Pinkham’s Children Must Be Living A Comfortable Life

The F1 reporter is a talented individual with nearly two decades of media experience. Wilfred and Willow’s mother has worked on various television shows, which must have added to her earnings. In addition, she must make a substantial income from covering F1 news.

Hence, Natalie Pinkham’s net worth must be a considerable sum. With her financial state, she must have provided her babies with a comfortable lifestyle. Likewise, Wilfred and Willow’s dad, Owain, is the CCO of Banijay Brands. His salary from his work must also be worth thousands of dollars.

So, Natalie Pinkham’s children must be growing up in a financially stable environment. Thanks to their parents ‘ fortune, both must be enrolled at famous schools. Moreover, the celeb kids are often seen enjoying going to different places on social media.

We wish Pinkham and her family more success and happiness in the future.

Pinkham’s little girl, Willow’s name, is of English origin, which means willow tree or freedom. Her middle name is a homage to the late Romanian Orphan named Mirela. The reporter met the child in 2000 while volunteering for the orphanage in her university years.