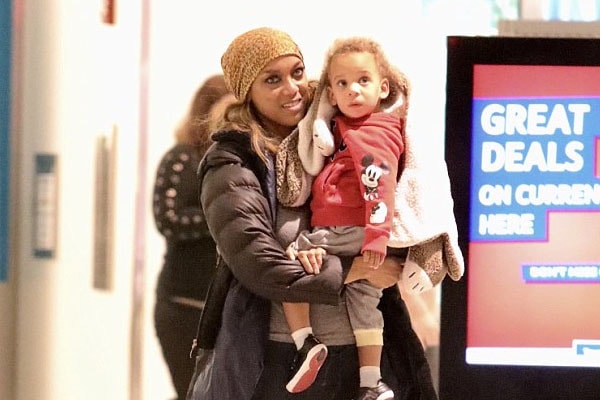 The American television personality, Tyra Banks‘ son York Banks Asla was born on the January of 2016. York Banks Asla is the only child of Tyra whom she had via surrogacy with her ex-partner Erik Asla.

Though from his father’s side, the young York has got three elder half-sister. They are Tatjana Asla, Taylor Asla, and Tatnum Asla, Erik Asla’s daughters, though the name of their biological mother is still not been disclosed.

The gorgeous Tyra Banks falls under the list of celebrities, who tend to keep their younglings away from the media spotlight. After all this time, Tyra has only uploaded photos of her son York Banks Asla maybe once or twice. The first picture she uploaded of her son was during the Father’s Day of 2017 which she regrets for some reason.

Tyra Banks was with her son York Banks Asla and her father Donald Banks at a restaurant. Later on, the trio went onto the beach to swim for a while. But as they were returning back, some paparazzi spotted them and started taking pictures of them. So at that moment Tyra called her baby daddy Erik and insisted on uploading a photo of their son on her Instagram so that the paparazzi won’t be able to earn money from the pictures of her son. So we can see how much conscious Tyra is about her son.

Same is the case with York Banks Asla’s father, Erik. His Instagram is filled with his photography but at times allows the world to catch a glimpse of his cute son.

The 2 and a half-year-old son of Tyra Banks, York Banks Asla speaks three languages, English, Spanish and Norwegian. And according to Tyra, many of York’s friends are struggling to pronounce red, and York is already up to silver, rose and rose gold. Plus as York Banks Asla was able to count till 20 since he was 18, Tyra believes her little one is really smart.

The name York means a Yew Tree in Celtic.