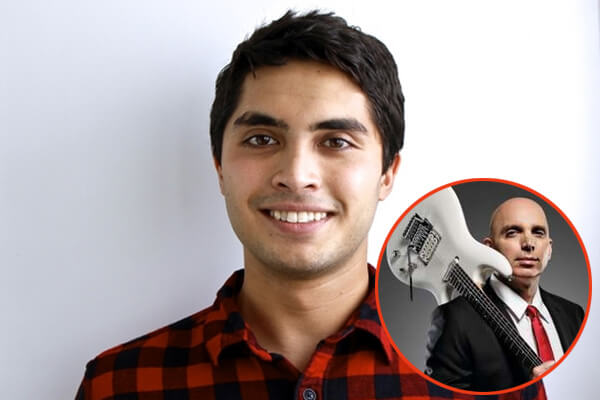 American rock guitarist Joe Satriani and his wife Rubina Satriani are the parents of Zachariah Satriani. He was born on 10 February 1992 in California. He is the couple’s first child together. The Italian-origin music star Joe and his wife Rubina are in a happily married relationship since 1981. The young Zachariah doesn’t have any siblings and is the lone child in the family.

Following his guitarist father Joe’s footsteps, Zachariah is pursuing a career in the entertainment industry. He is reportedly working as a writer, director, and movie producer.

Joe Satriani’s wife Rubina Satriani is a lucky mother, as she has raised her son well and made him capable with many talents. According to his IMDb page, Zachariah is a filmmaker, not only as a director or producer but also in other departments. As such, Zachariah, who is in his mid-twenties, is a promising director, writer, producer, actor, cinematographer, and art director. He often posts selfies on Instagram, enjoying his lifestyle.

Undoubtedly, Rubina Satriani’s son Zachariah is a good-looking person with many skills and lots of creativity. As for the movies he has written and directed, Zachariah is the director of the 2018 documentary film, Beyond the Supernova, and the short film, Thanks for the Advice (2015). As an actor, he has also performed in the TV series, Pound House. Zachariah has also worked in the art department of the short drama Sirens & Serenity (2018).

Apart from professional life, Zachariah also lives a personal experience as a common man. He loves meeting his friends and hanging out with them.

Through Zachariah’s Instagram, we can speculate that he has been dating his gorgeous girlfriend Sofia Palmer for some time. He usually posts stuff related to his work on his social media profile, but at times, he gives a glimpse of his beautiful partner.

Moreover, he adores his parents and gets inspiration from his mother Rubina, as well as his musician father, Joe. Going by his present dedication and hard work in movie making profession, Zachariah is surely eyeing for his upcoming film to become a box office blockbuster.