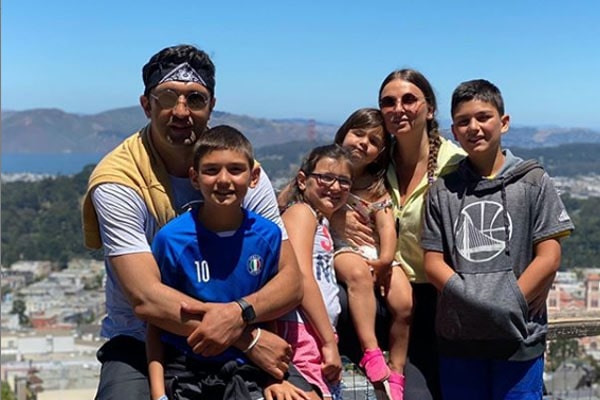 The Georgian-Turkish professional basketball executive and former player, Zaza Pachulia is the father of four adorable children, two sons, and two daughters. He had his children with his gorgeous wife, Tika Pachulia. The lovely couple married each other in 2008. Zaza and Tika are doing great as parents and doing everything to make their children happy.

Davit And Saba Are Following Their Dad’s Footsteps

Zaza Pachulia and Tika Pachulia’s sons, Davit and Saba, are already following their dad’s footsteps and enjoying the basketball game from such a young age. The Pachulia brothers are thriving day by day to become some of the best basketball players in the future, just like their dad.

Well, as a matter of fact, Zaza has named his eldest son Davit after his great father, who was a judo champion.

Davit and Saba’s dad, as a professional basketball executive and former player, is a plus point. They are probably learning so much from their dad. Zaza takes his boys to NBA matches as well. Both of Zaza Pachulia’s sons Davit and Saba are fortunate to have such a talented father, indeed.

Along with that, Davit and Saba have their own Instagram accounts too. If you go through Davit Pachulia’s Instagram, you can see how much the kid is passionate about basketball. He also loves clicking photos with NBA ballers. The same goes for Saba’s Instagram account.

Zaza practices basketball with them so that they can enjoy the game to the fullest. So, if everything goes well, we might see Zaza Pachulia’s sons as basketball players for the NBA teams in the upcoming years.

Going through Zaza Pachulia’s Instagram, he takes his family to beautiful places for holidays and vacations. It’s no doubt that he would do anything for his daughters just to see the priceless smile on their cute faces.

Zaza loves to be around his daughters just to have a strong father-daughter bond. He loves taking his youngest daughter, Nutsa, as his workout partner. Similarly, Miriam is growing up as a gorgeous girl. Since Zaza Pachulia’s net worth is estimated at $13 million, and his kids are living the best life for sure.

Then, Davit said ‘Kevin Durant.’ And his daughter, Miriam took a long pause before revealing her answer. She then whispered ‘Klay Thompson.’ Poor Zaza replied with a resigned laugh saying, “Congratulations, Klay.”

Zaza Pachulia’s children love their dad but they were pretty clear who the coolest members of the Golden State Warriors were.

Saba Pachulia – According to Arabic origin, the meaning of the name, Saba, is ‘Morning breeze.’

Miriam Pachulia – Similarly, Miriam is also of Hebrew origin, and it refers to

Nutsa Pachulia – The name, Nutsa, means you desire system and order and prefer to think methodically and practically.