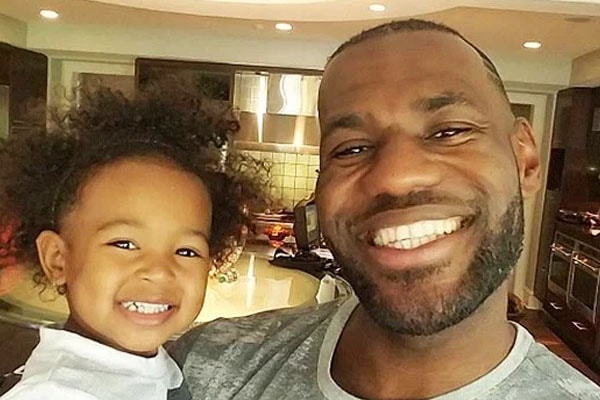 LeBron and Zhuri smiling for a photo

The famous NBA basketball player LeBron James has got three children, two sons and a daughter with wife Savannah James. LeBron James’ daughter Zhuri Nova James was born on the 22nd of October, 2014 in Akron, Ohio.

Zhuri is the third child of King James and has got two elder brothers named LeBron James Jr. and Bryce Maximus James. When the little Zhuri was born, the whole family was delighted to welcome a new member to the James family. Since she is the smallest member of the family, we bet everyone adores the little daughter of LeBron James.

With LeBron James already being considered a legend of the game, it is no surprise that his daughter is into basketball too. People even consider the little Zhuri as a basketball genius. After finishing a game, LeBron loves FaceTiming, his daughter. Once he was doing so, the little Zhuri asked to speak with Kevin Love, her dad’s teammate. During that time she complimented Kevin on the game.

LeBron is said to have the best basketball mind so for Zhuri to inherit some of that is a common thing. As LeBron James’ daughter is still a youngling, only time will tell us if she will start playing basketball. But if she does, she will get proper guidance and a lot of responsibilities on her shoulder. As she is the daughter of King James obviously, people will have expectations from her.

Every parent has some bond with their children, and so does LeBron. He adores his daughter Zhuri a lot. When the family of LeBron James went to view a match of his, his daughter wanted a candy, and like a good father, Lebron is he got his daughter the candy. Sports Illustrated tweeted a cute video of the Zhuri impersonating her father, LeBron James.

And the Oscar goes to…

Zhuri James for her uncanny impersonation of her father @KingJames reacting to refs ? ? ? ? ? ?

LeBron James also looks after his daughter when she is out riding a bicycle.

The name Zhuri is a derived version of Zuri which is from a Swahili origin. It means beautiful or good.

As for the name Nova, it is originated from Latin which means new.