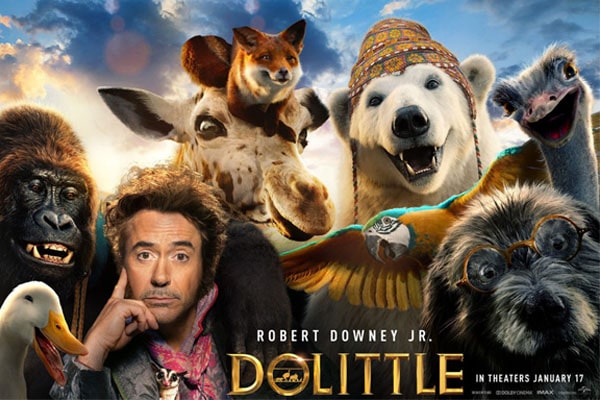 Avengers fame actor, Robert Downey Jr. will be seen in a lead role in the upcoming movie titled Dolittle, which will be hitting theatres on January 27, 2020. Image Source: Daily Motion.

Everyone in the theatres walked out in tears when the beloved MCU character Tony Stark aka Iron Man played by Robert Downey Jr. sacrificed his life to save the entire universe. Downey not only died in the franchise but his contract with the Marvel Studio also ended with the End Game movie.

However, it is not quite sure that he might not appear in the upcoming MCU movies and projects with the new contract. As of now, he has surely taken a break from his hit Disney franchise. After the gigantic success of Avengers: End Game, blockbuster movie of all time, Downey has stepped his foot towards lighter movie projects and one of them is the upcoming movie titled Dolittle.

His Audition For The Role As Dr. John Dolittle

Even though Robert Downey Jr. gave over a decade to the role of Iron Man, the actor’s career is alive and well. He already seems ready to take on another well-known character in early 2020. Downey is starring as Dr. John Dolittle in the movie titled Dolittle, alongside an impressive voice cast of the exotic animals.

Prior to the release of Dolittle, Dr. John Dolittle is warming up with his CGI animal co-stars. The video features with some fun auditions lines from fan-favorite movies including Despicable Me and Scarface.

The video clip from Universal Pictures is too adorable to watch as Robert brought his signature charm to introduce audiences to the creatures. The movie features a voyage of him on a ship to find the cure to an illness of the Queen of England. All and all, the video has been a quite successful smart marketing strategy for the upcoming release. Even before the release the movie Dolittle has already received some mixed reviews and has also dealt with reshoots because of some bad buzz.

Dolittle, Eddie Murphy’s version’s film set in a modern era and will adapt the famous Hugh Lofting‘s favorite childhood books. The story will be set in the Victorian era and is adapted into a movie set in the year 1967. Downey played as Dr. John Dolittle is a veterinarian impressively skilled at his job to Queen Victoria and he has an ability to talk to animals. John had lost his wife seven years prior to becoming somewhat of a hermit in his home, filled with different types of animals. When the queen becomes ill, he is forced to leave the comfort of his manor and sets sail to an island to find her a cure.

The movie quite resembles the dramatic tale of Disney live-action movies including Dumbo or Christopher Robin. The movie trailer has also highlighted to Disney by pointing out the involvement of filmmakers of Disney. It totally makes sense for Universal to want to grab audiences from Dolittle considering the huge success of live-action featuring talking to animal movies such as The Lion King which hit the box office and earned over $1.6 billion worldwide.

Because of some issues and mixed reviews, the title of Dolittle got changed from The Voyage of Doctor Dolittle. The release date also got shifted for Dolittle from May to April 2019. Of course, Avengers: Endgame dominating the season, was the reason for the studio to dodge the date. However, the movie will be hitting the theatres on the 17th of January 2020.

In the extra time, it was reported that the Universal’s producers hired directors Jonathan Liebesman and Chris McKay to do reshoots replacing Stephen Gaghan. In addition to the report provided by Collider, the movie’s producers were quite unsatisfied with some of its visual effects and comedic delivery and subsequently felt that the movie had major issues that needed to be changed. Also, someone took to Reddit who allegedly worked on the movie, called out Gaghan a batshit director.

So someone that worked on the new Dr Dolittle movie is posting about it on reddit aaaaaaaaaaaaand….. pic.twitter.com/uhtb0FjSpf

Keeping the controversies aside, Robert Downey Jr’s name alone is a plus point for tons of film fans. Furthermore, the additional voice cast and their involvement in the movie have also created the buzz.

Craze For The Movie: Will It Survive At The Box Office?

The January 17th releasing movie, Dolittle is already in the highlight with the multiple A-list-voiced CGI animated animal characters around Dr. John Dolittle starred by Robert Downey Jr. The movie’s budget production is quite huge and is reported to be $175 million. Dolittle even costs $15 million greater than the last of phase 3 MCU movie, Spider-Man: Far From Home featuring Tom Holland as the lead.

The first movie trailer that was released in October 2019 hit the #1 trending video on YouTube, in terms of popularity and had been viewed 14 million times just over three days. With that being said, definitely. the audiences are going to buy tickets for the movie, enjoying it with the popcorn.

No matter what, “We all love you, Tony Stark, 3000.” Audiences are already getting Robert Downey Jr as a lead with cute CGI animated animal characters. Not only that but the movie also features Tom Holland’s glasses-wearing dog character, Jip. The only thing that might be missing from the movie is their Marvel line. Dolittle also stars John Cena as the polar bear Yoshi, Selena Gomez as the giraffe Betsy, Kumail Nanjiani as the ostrich Plimpton, and Marion Cotillard as the fox named Tutu. As mentioned before, the movie will be hitting the theatres on the 17th of January 2020.

Now only time will tell us whether fans will appreciate Robert with his new character or not.