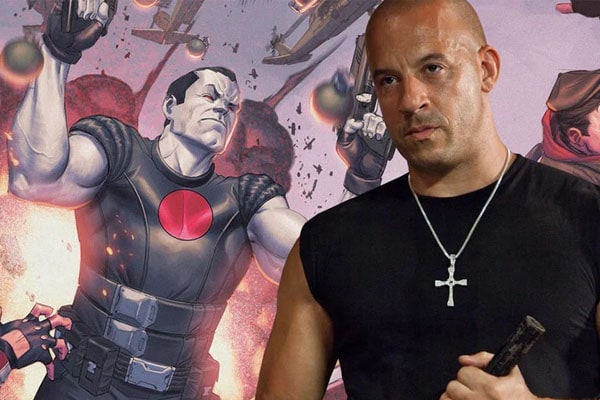 Although “I m Groot.” and “We are Groot.” was the only phrase, Vin Diesel uttered in the entire MCU movie franchise, it was the most effective, hilarious, and catchy line for the entire audience and fan community.

The street racer has already made fans go crazy with his charm and manly attitude through his successful Fast and Furious franchise. He even impressed the audiences and gave a heart-touching tribute to late Paul Walker, who passed away during a car accident. “We all love you, Paul; See you again.” really made the viewers shed tears. Not only that but the actor has also named his son Paul, after his beloved friend.

Certainly, fans are eager to see Vin Diesel hitting the big screen as a lead superhero. Well, the wish isn’t in the dumping as Diesel will be seen in the upcoming Sony’s superhero movie titled Bloodshot. As far as the trailer suggests, the actor will be playing a former marine-turned biotech enhanced superhero for the film.

Bloodshot is the Valiant comic book movie adaptation film, produced and distributed by the Sony executives. Although Valiant Comics is yet in the shadows and is not as popular as Marvel or DC among the comic book fan community, it has made its name with IPs like Harbinger and Ninjak over the years. As of now, the publishers are in the process of turning their titles into web series, TV shows, and films, including Bloodshot.

Rise Of Other Comic Book Characters: Rather Than DC And Marvel

No doubt, superhero movies, mainly Marvel and DC, is burning fires at the box office. It seems like the superhero trend is never growing old for the movie fans and is not going anywhere anytime soon. With DC and Marvel superheroes bulging and dominating the film industry, other comic book characters are rarely recognized or have been proved to be successful at the box office.

So like so far, Sony is trying to bring their other characters other than Marvel on the big screen. With the constant up and down Marvel-Disney and Sony contract with the popular comic book character Spiderman, Sony seems to be ahead in the game by introducing heroes from different comic books among the audiences.

Bloodshot’s Official Trailer Is Out

The Bloodshot #1 trailer, courtesy of Sony Pictures, was uploaded on the 21st of October 2019. The trailer was quite impactful and had positive reviews among the critics and audiences. The trailer has over 9.3 million views on YouTube as of December 2019.

Bloodshot is adapted for the screen by writers Jeff Wadlow (Truth or Dare, Kick-Ass 2) and Eric Heisserer (Bird Box, Arrival). The movie marks the directing debut for Dave Wilson, VFX supervisor for Avengers: Age of Ultron. Who knows it might even launch an entire Sony-Valiant cinematic universe. The movie with high hopes and potential; will be screening with Terminator: Dark Fate in theaters.

Yes, the trailer has hyped the awaited movie even more and has an impact on the audience. Bloodshot’s trailer introduces Vin Diesel as Ray Garrison, a soldier who was killed alongside his wife, Gina (Talulah Riley.) He is later resurrected and enhanced with super-healing and super-strength through nanotechnology by the RST corporation. Nevertheless, as the movie is quick to establish, but according to the preview, Ray’s memories are not only fragmented; it was also intentionally altered by RST. He is fooled into believing that he’s hunting the people responsible for his wife’s death.

The movie Bloodshot appears to be a violent, possibly R-rated tone along the lines of those properties. For these obvious reasons, the movie has a fair chance of ending up as a derivative of recent superhero movies and TV series, insted being a fresh addition to the genre. As mentioned before, the film, Sony’s Bloodshot is ought to be hitting the theatres on the 21st of February 2020.

Taking A Break From Fast And Furious And MCU Movies Franchise?

Vin Diesel is one of the most successful and all-time fan-favorite actors in the Hollywood industry. After, his lead role as Dominic “Dom” Toretto in the hit Fast and Furious franchise and side character as the tree Groot in the MCU, he is going to be seen as a lead superhero in the upcoming Sony’s ultra-violent movie titled Bloodshot.

No matter what, each audience has its own choice of taste, and not all movies can satisfy the viewer’s needs. But, the upcoming movie, Bloodshot, has set a positive impact among most of the viewers. With fans eagerly waiting for the movie, it is believed that Bloodshot will be released on the 21st of February 2020.