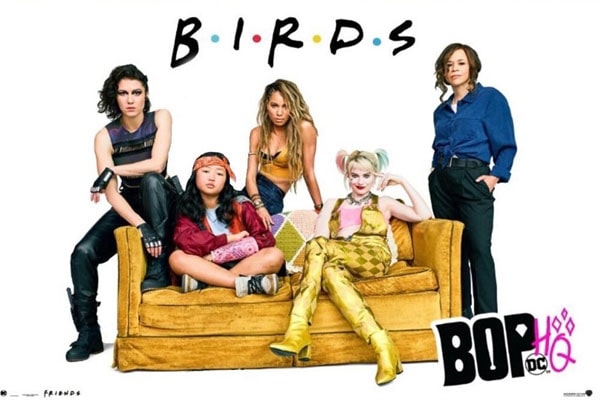 DC's Birds Of Prey, hitting on theaters on the 5th of February 2020, has a lot of expectations from both fans and critics included. Image Source: Comicbook.

One of the most awaited movies, DC’s Birds Of Prey will be hitting in theatres on the 5th of February 2020. The movie has a lot of expectations from both critics and fans. As we all know, DCEU movies have quite a history for the critic’s ratings and up and down collections at the box office.

With Warner Brothers(WB) studios constantly hiring and firing new directors and casts have made the situation even worse. All in all, the movie will be set in the part of the DCEU franchise but will have its own standalone story and some recurring cast and new cast and with a bunch of cameos might surely impress the audience and survive at the box office. Here is what you should expect from Birds of Prey before going to the theatres.

Anti-Hero Movie: Bunch Of Bad Ladies With The Motto To Do Something Good

Birds of Prey is completely an anti-hero, R-rated movie that will be taking place in the DCEU timeline. Unlike Joker, that is completely a standalone film, Margot Robbie‘s Harley Quinn will also be breaking the fourth wall like Marvel’s fan-favorite character Deadpool meaning, she will be constantly cracking jokes directly among the audience.

As the title suggests, Birds of Prey will be great at launching a bunch of new supporting cast of heroes, villains, and anti-heroes of DC comics who are in for the ride. After the movie hits theatres, DCEU will have established DC characters including Black Canary, Huntress, and Cassandra Cain.

Not A Sequel Of Suicide Squad

Although the story of Birds Of Prey might quite sound like its frenemies movie, Suicide Squad, the plot and movie have been made entirely different. Also, WB has kept it quite separate from it and has officially mentioned that it is not the sequel of the Suicide Squad.

Cathy Yan‘s directed movie, Birds of Prey will be a completely new experience for the audience to enjoy it on the big screen. Moreover, there is also the news of the sequel of suicide squad that will probably be named Suicide Squad 2. James Gunn, Guardians Of The Galaxy 2 director, will be directing the movie and Margot Robbie will also be rejoining her role as Harley Quinn in the movie. However, Will Smith aka Dead Shot has ended the contract and would not be rejoining the cast in the upcoming Suicide Squad sequel.

Fans might have preferred to have seen Harley be the antagonist just like in the animated series. However, it is not altogether bad that the Cinematic Universe is blending it forward in painting her as some sort of hero. The WB game company has also portrayed Harley as a leading superhero character alongside Batman in the Injustice 2 story mode game.

Knowing the importance of the character, WB has done a brilliant job by giving Harley a character of her own rather than be tied down to the Joker as she was in the Suicide Squad. The very movie nearly showcased and was defined by her obsession with the Clown Prince of Crime. But with Birds of Prey, fans can clearly find out where the boundaries are for Harley’s anti-hero personality starting, and where her villainous nature reappears.

Entering To the New Era Of Female Leading Superhero Movies

Of course, WB’s Wonder Woman released in 2017 had set the trend that the female leading superheroes can be successful at the box office. Now, with Wonder Woman 1984 and Black Widow clashing the theatres in 2020, Birds Of Prey is the startup for both of them.

No doubt, female-driven superheroes movies are smoking fire at the box office and who knows with Birds Of Prey hitting the cinema on February 5, 2020, might be one of the most successful females leading superheroes movies of all time.

Joker, the standalone comic book adaptation movie, fantastically portrayed by Joaquin Phoenix has already proven the importance of R-rated movies and the freedom of writers and directors to present it on the big screen. Joaquin Phoenix’s Joker has been the highest-grossing R-rated movie of all time collecting more than a billion dollars at the box office. DC Entertainment and WB studio has kept it separate from the other DCEU movies and has tagged the movie as the DC Black Label.

Mentioned as before, Cathy Yan’s Birds Of Prey will hit on the big screen on the 5th of February 2020. With fans and critics eagerly waiting for DC’s upcoming installment and future projects, Birds Of Prey clearly seem to make an impact with Margot Robbie as the lead.

Each and every audience have their own choice of taste and as we all know not all movies can satisfy the viewer’s needs and choices. However, the movie should satisfy most of the viewers when they manage time from their busy schedules. We pay, sit down, relax and enjoy it with the popcorn, of course, we deserve a better movie. All in all, every movie is made for the audience.