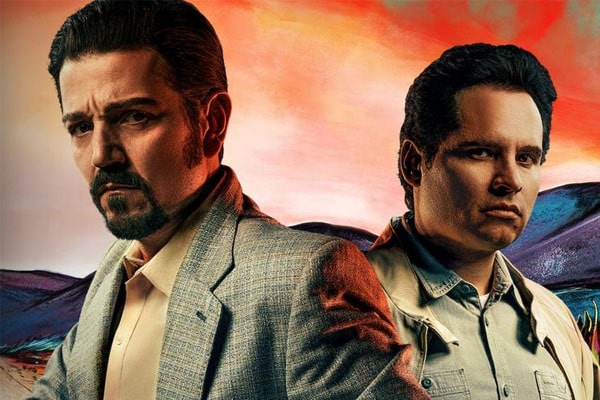 Narcos: Mexico Season 2 will be releasing on the 13th February 2020 on Netflix. Image Source: Fan Theory.

Effectively Narcos: Mexico is a spin-off of the original series that moves the action from Colombia to Mexico. The series followed the unbelievable true story of Miguel Angel Felix Gallardo, creator of the Guadalajara Cartel, and with that comes the modern drug trade in Mexico.

Nearly a year after the release of its first season, season 2 of Narcos is to be aired on the 13th of February 2020.

On the 17th of December 2019, Netflix released the first look of Narcos: Mexico, season two. The look seems to introduce Scoot McNairy‘s character as a major player alongside Diego Luna, returning star.

Once again, Narcos: Mexico will unfold under the guidance of an English-speaking narrator. However, the identity of the narrator is yet to be revealed and supposed to be newcomer McNairy. McNairy’s casting is kept hidden under the shadows until the show is launched.

Obviously, played by Diego Luna, the first season completely focused on how Rafael Quintero and Gallardo, using a plaza system for shipping and distributing, combined the various cartels across Mexico. The DEA played by Matt Letscher and Michael Pena looked helpless as the business thrived across Mexico.

Catch him if you can. Narcos: Mexico Season 2 premieres February 13 on @netflix. pic.twitter.com/OpScR1Et9h

As we all know at the end of the previous season, Michael Pena’s character Kiki Camarena, DEA agent died a pretty awful death by the hands of the cartel. Now, Narcos: Mexico will cleave the actual case files of what happened, hence Camarena’s death lits a fire under the DEA. That is when the unseen narrator played by Scott McNairy might turn up.

With that being said, Narcos: Mexico is basically a spinoff series. As a fan, each person has own expectations from his favorite bucket list of TV series. The wonders and mysteries that this drugs and cartels’ story brings to the audiences will be worth watching.