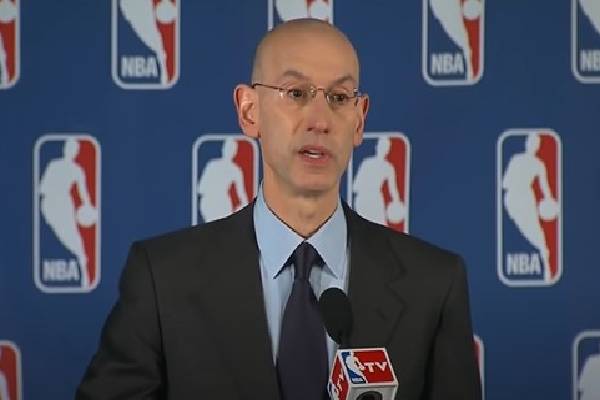 Adam Silver (born on April 25, 1962) is best known for being the National Basketball Association (NBA) commissioner. Unanimously, he was elected as the fifth commissioner on February 01, 2014. Apart from being the CEO, Adam Silver is also a lawyer and sports executive. He ranked no. 1 on 50 of the most influential people in the Sports Business in 2016.

Even the floor cleaners at the NBA make $80,000 per annum, which is more than the national average salary of the US. It is given that someone at the top of the hierarchy makes enough money to make our jaw drop.

So, let’s get to know more about Adam Silver’s net worth and his salary in this article.

Adam Silver Net Worth And Earnings

As already mentioned before, Adam Silver is a CEO, a lawyer, and a sports executive who focuses on both personal and organizational growth. Looking at his previous and current position, we assume he has made an appreciable amount.

As per, Celebrity Net Worth, Adam Silver’s net worth is around $35 million. He had quite a long career journey before he served NBA. Adam Silver’s salary is $10 million per year. After four years, NBA extended Adam’s contract through the 2023-2024 season.

By the end of the contract, he will have earned precisely $100 million alone with his salary. In addition to that, he will earn bonuses for achieving various milestones and goals.

Adam served many high-ranking positions before he became a commissioner at NBA. He was the NBA’s deputy commissioner and chief operating officer for about a decade. He also served as the President and COO at NBA Entertainment.

As a result, Adam was an executive producer of the IMAX movie “Michael Jordan to the Max” and “Whatever Happened to Michael Ray?”

Well, with all those big titles, the NBA commissioner must have already earned a big amount of money. And with his current position and fame, there is no doubt that Adam Silver’s fortune will increase in the coming days.

Adam Silver Is Also A Businessman

As per ABC News, Adam Silver announced the formation of a new business investment entity, namely NBA Africa in 2021. Many former star players invested in the entity, including Nigerian businessmen and former NBA greats Dikembe Mutombo and Grant Hill.

New @ForbesSports: @NBA announced the formation of NBA Africa, a new company that will conduct its business on the continent, with outside African investors and investment from @officialmutombo, @realgranthill33, @JoakimNoah and @LuolDeng9 https://t.co/aock1VcH3S

As per Adam, NBA Africa will conduct the league’s business endeavors in Africa, including the new Basketball Africa League (BAL). And the enterprise value of NBA Africa is already nearly $1 billion. With all those efforts to improve the livelihoods of society, Adam Silver’s net worth might also benefit from the proceedings.

Also, Adam previously worked as a lawyer at the New York Law firm of Cravath, Swaine, and Moore. According to New York Times, the average salary of a lawyer is $160,000. Undoubtedly, Adam must have earned more because of his transparency and perfectness in his works.

The NBA commissioner, Adam Silver’s fortune is estimated to be $35 million which makes him a multi-millionaire. Therefore, he must live a lavish and comfortable life along with his family. Silver currently lives in New York City with his family, including his wife, Maggie Silver, and two children.

Although Adam has been able to keep his assets and lifestyle details entirely away from the limelight of social media, one can assume how fancy his life is. Considering his income and net worth, he must have bought many real estate properties and luxurious cars.

Well, we hope Adam continues to succeed in his professional life and manages to amass even more fortune.