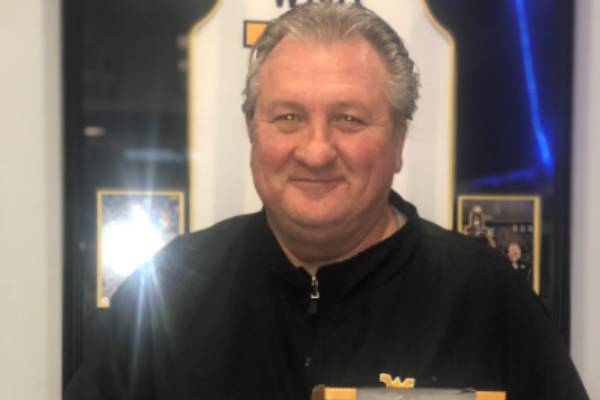 Bob Huggins is one of the most respected college coaches of all time. Image Source: Bob's Twitter.

Most American players, fans, and basketball personalities must be familiar with Bob Huggins. Robert Edward Huggins, nicknamed Huggy Bear, is the current head coach of West Virginia University’s basketball team, West Virginia Mountaineers. The 68-year-old coach has won the NCAA Divison I Regional twice during his coaching career. Furthermore, Bob was named coach of the decade in 2005.

Bob began his coaching career a long time ago, in 1977. He started out as an assistant coach in West Virginia. Since then, Huggins has established himself as one of the most respected and admired college coaches. In his successful career of more than three decades, coach Huggins must have made a significant amount of money, adding to his fortune.

Hence in today’s article, let’s get to know about Bob Huggins’ net worth and lifestyle.

Bob Huggins Net Worth And Earnings

According to Celebrity Net Worth, Bob Huggins’ net worth is valued at an astonishing $12 million. Being one of the veteran coaches in today’s basketball world, Huggins is one of the highest-paid college coaches with a comfortable fortune.

So, how has the coach managed to amass such a massive empire for him? Also, let’s break down his current contract and look at his salary and earnings.

Bob Huggins graduated from college as a point guard averaging 13.2 points. After his graduation, Bob had a tryout with the Philadelphia 76ers to make it in the National Basketball Association (NBA). But unfortunately, Huggins wasn’t selected, and he returned to pursue a master’s degree in health administration from West Virginia University.

During his masters, Bob decided to begin his coaching career as an assistant under head coach Joedy Gardner in West Virginia. After working under Gardner, Huggins moved to Ohio State University to work as an assistant coach to Eldon Miller.

Furthermore, Bob also worked as an assistant coach for the University of Central Florida (UCF) men’s basketball team. However, he only worked in Florida for a year before moving to Akron to be a head coach. Huggins must have still made a considerable sum from his tenure as an assistant coach.

Reports suggest that assistant college coaches nowadays earn anywhere between $46,285 to $79,078 or above it, depending upon their experience, record, and portfolio. However, it must have been prominently less when Bob was an assistant coach during the 70s and 80s. But he must have still bagged a respectable amount adding to his fortune.

After working as an assistant coach at two different universities under two head coaches, Bob Huggins’ first head coach job came at Walsh University. He led the Walsh Cavaliers for three seasons and during his tenure, Bob was named Coach of the Year twice.

Since then, he has been the head coach of many prestigious universities in Cincinnati, Kansas State, and his hometown West Virginia. Furthermore, Huggins has guided the University of Cincinnati and West Virginia to NCCA state championships during his illustrious career.

Bob Huggins has been coaching basketball at the University of West Virginia for fifteen years since 2007. His current contract ties him with the Mountaineers through the 2023-2024 season.

But, that is not the main point here; it’s his lucrative contract and the pay that comes with it. In 2017, Huggins signed a four-year extension with an annual salary of $4.15 million. His current contract will pay him the same amount until its expiration after completing the 2023 season. However, Bob has an option to extend the contract by two more years.

By taking Bob’s annual salary from 2017 till his current contract expiration date, he will earn around $29 million. Hence, it must not come as a surprise that Bob Huggins’ net worth sits comfortably in tens of millions.

With a handsome fortune of $12 million, Bob Huggins lives a comfortable and luxurious life with his wife and children. Bob has been married to his wife, June Huggins, since 1977. During their marriage, the couple has welcomed two daughters, Jenna Leigh Huggins and Jacqueline Huggins.

Bob Huggins and his wife, June,  live in their 8,000 square foot house in Morgantown. The lavish mansion has two half baths and five full bathrooms. The place also consists of an open floor with dark woods and low lighting, making its ambiance warm and comfortable. Furthermore, the house also has a mini home theatre, a pool table, and a fully stocked bar.

Besides his Morgantown mansion, Bob also has a lake house outside the city in West Virginia. He had a mini-reunion with the 2015 Fantasy Campers at the residence in 2015.

Love having the 2015 Fantasy Campers at my new Lake house on Cheat Lake! pic.twitter.com/DpYWLnGpn8

Furthermore, Huggins is active on social media. He has a Twitter account and shares lovely insights of the game and some glimpses of his personal life. We wish the talented coach all the best for his future. Let’s hope to see him in the game for many more years contributing to the game and his massive wealth.