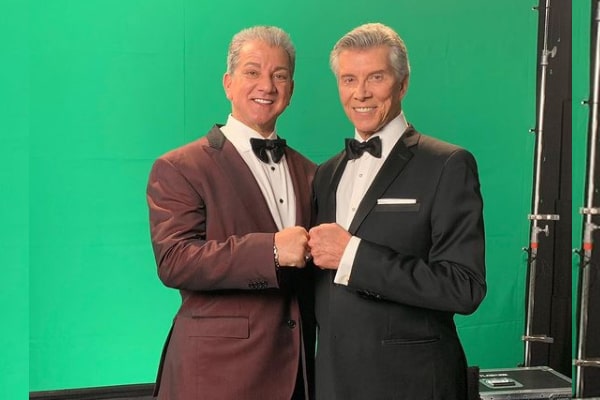 Bruce Buffer and Michael Buffer are the most renowned ring announcer in combat sports. They have made multi-million dollars worth of fortune from their successful career as an announcer. The half-brothers were introduced when their birth father saw Bruce on television.

However, being introduced amidst the fame is not the only interesting thing between the Buffer brothers. Since both Bruce and Michael are prominent names as ring announcers, they’ve made pretty bucks throughout their career. But who’s richer?

Also Read: Find Out Who Is Richer Among Jennifer Lawrence And Cooke Maroney

American UFC announcer Bruce Buffer’s net worth is estimated to be $10 million. He earned his fortune as the main Octagon ring announcer for the UFC since 1996. Ever since then, he’s been an aspiring man on the mic for almost every major UFC event.

Furthermore, Buffer’s UFC salary of $100,000 per event shows his competence and how his fortune increased throughout his career.

Moreover, Bruce has introduced his own catchphrase he yells out before the main event, “Ladies and gentlemen, we…are…live!” followed by “This is the main event of the evening” and introduces the final two fighters “This is the moment you’ve all been waiting for” and finally, “It’s Time’.”

Likewise, Buffer’s voice has been featured in the video game Smite. Similarly, UFC crazies must have heard his voice on the song “It’s Time” by DJs Steve Aoki and Laidback Luke. Moreover, Bruce also appeared on ESPN’s World Series of Poker Main Event and TV series Poker After Dark. His appearances can also be noticed in other series like Friends, Entourage, and films like Here Comes the Boom.

Besides UFC, Bruce Buffer also has a YouTube channel named Bruce Buffer with 5.23K subscribers. He started the channel in 2014 but recently started uploading continuously. Therefore, we shall see his channel blossom and help his net worth increase.

Besides, Bruce also facilitates his fans with personalized podcasts and audio files. Hence, it wouldn’t be a drag to mention Bruce’s fortune might proliferate in the future.

Hence, thanks to all the side work and being UFC ring announcer, Bruce Buffer’s net worth is massive, but it’s lesser than his brother, Michael Buffer.

Michael Buffer Net Worth And Earnings

Bruce Buffer’s world-famous announcer brother, Michael Buffer’s net worth is a whopping $400 million. So, it is clear as day that Michael is richer than Bruce. He also has more experience than his younger brother.

Moreover, Michael has been in the ring announcing world since 1982 and has established a massive-massive reputation. Best known as one of the greatest ring announcers for boxing and wrestling matches of all time, Buffer trademarked the phrase, “Let’s Get Ready to Rumble.” As a result, he has made millions of dollars in royalties out of the trademark.

Moreover, depending on the match, Michael Buffer’s salary ranges between $25,000 to $100,000 as he utters, “Let’s get ready to rumble.” He reportedly has been paid $1 million on scarce occasions. Surprisingly, it was Bruce Buffer who inspired his brother with the idea of commercializing his catchphrase.

Michael Buffer, who is worth $400 million, lives lavishly. He resides in LA with his wife, Christine Prado, also recognized as Christine Buffer, and two adorable fur babies in a luxury mansion with a lagoon-like swimming pool.

Likewise, Buffer’s garage is filled with supercars, including a 2019 ZRQ Corvette. Since he was a failed car salesman and model before making it into the boxing scene, Michael understands the importance of hard work. Therefore, Michael’s continuous dedication towards works gifted him the liberty to afford the luxury.

Similarly, the veteran voice of the octagon, Bruce Buffer’s lifestyle, is not less luxurious than his brother’s. His patio home in Venice beach is lovely.

Furthermore, Bruce is as fascinated as his brother, Michael, when it comes to sports cars. While Michael parks Corvette in his garage, Bruce drives Ferrari.

Therefore, regardless of the massive net worth difference of the Buffer brothers, they live in luxury, and their assets are invaluable.

Charity Works By The Buffer Brothers

Veteran announcer Bruce Buffer auctioned off his introduction cards from UFC 194. The auctioned goods also include a copy of the event program, signed by himself in 2016 at a charity event.

Similarly, Michael fought back cancer in 2008, and thus, he gave back via his profession at the 19th Pump Foundation Charity.

In conclusion, Michael Buffer’s net worth is higher than his brother, Bruce Buffer. However, both are living well with their respective partners and giving back to society at the same time. Hence, let’s hope to hear more about their prosperity in the future.