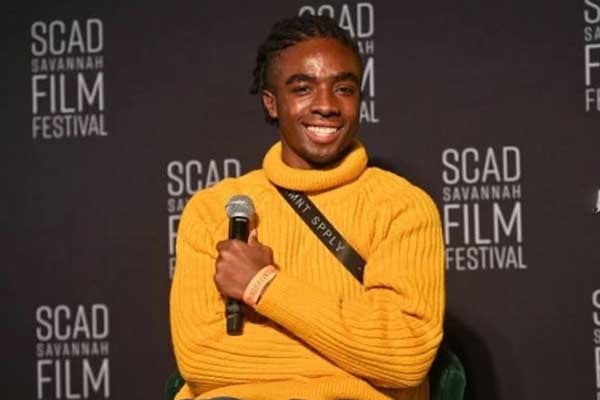 Caleb McLaughlin is a well-renowned name in Hollywood. He is best recognized for portraying Lucas Sinclair in Stranger Things. His character growth and progress alongside the plot make the series more interesting.

Though Stranger Things skyrocketed the actor’s popularity, it was not his first project. He has acted on many movies and television series in his career. Furthermore, the performer must have earned a notable amount from his acting gigs. He loves music and has worked on several projects, which must also add to his fortune.

As per Celebrity Net Worth, Caleb McLaughlin’s net worth is $3 million. So, let’s break down his salary and earnings from Stranger Things and other well-known sources in this article.

Caleb McLaughlin Net Worth And Earnings

The film star began his journey as a child actor on Lost in the Stars at the Glimmerglass Opera House. The experience cemented his determination to work in the entertainment industry. Eventually, he worked his way up from theatrical productions to critically acclaimed series and films.

With his remarkable acting skills, Caleb has landed roles in many blockbuster hits. So, his fortune of $3 million from his Hollywood career isn’t surprising and is well-deserved.

As mentioned earlier, the actor first acted in opera at a young age. He soon made his debut on Broadway as a Young Simba in The Lion King in 2012. In addition, he took dance lessons for a year and studied at the Harlem School Of the Arts under Aubrey Lynch.

The broadway actor made his acting debut with Noah Dreams of Origami Fortunes. He also had guest roles on Law & Order: Special Victims Unit, Unforgettable, Forever, What Would You Do? etc.

Caleb’s movie credits include High Flying Bird and Concrete Cowboy. Both made a commercial success and won many nominations and awards. Moreover, the artist has also starred in Shades of Blue, The New Edition Story, Ultra City Smiths, Final Space, etc.

McLaughlin’s income per episode is $250K as per Celebrity Net Worth. Hence, he must have earned a hefty amount from starring in the projects mentioned above. Thus, Caleb McLaughlin’s net worth must have increased alongside his prosperous career.

The performer made a breakthrough after starring in Stranger Things in 2016. He appears alongside Millie Bobby Brown, Finn Wolfhard, Winona Ryder, David Harbour, and others.

McLaughlin initially started as a realistic and wary character in the Netflix series. However, his character took a turn and gained much maturity in the following seasons. Caleb’s lifelike portrayal and emotional depth have made Lucas Sinclair one of the beloved characters in the series.

The actor made $2 million before deducting taxes and fees at the end of the third season. He was reportedly paid $2.25 million for the fourth season of the series.

Thus, Caleb McLaughlin’s net worth has risen thanks to his earnings from Stranger Things. It will undoubtedly increase more in the days ahead.

Caleb has given outstanding performance in each of his acting projects. But now, he is now slowly transitioning to be a renowned singer in the industry.

The Stranger Things star has always loved music from a young age. His background in musicals and Broadway also speaks for his passion for music. Moreover, the young guy previously starred in Sia‘s single Santa’s Coming For Us in 2017.

The artist also released his first single Neighborhood in November 2021. It is available on all music streaming sites and has gained 134K views on YouTube as of January 2022.

The singer has opened a YouTube channel to promote his songs. His uploads include music videos, teasers, studio recordings, and live talks. In addition, the channel has 18.3K subscribers and 211K+ total video views.

McLaughlin’s income from YouTube amounts to $5 – $74 monthly and $55- $888 yearly. As he uploads more content, his earnings will increase in the future.

When talking about actors, most assume they run after riches and fame. While financial success is needed, it might not be the sole reason for everyone. A similar case is for Caleb, who pursued acting not to be a celebrity but due to his passion for the field.

So, the actor’s focus has been to hone his talents instead of fulfilling materialistic needs. It might be a reason behind his reluctance to reveal his wealth and assets.

Still, the television personality must own beautiful houses or properties. According to Caleb’s interview, his first car was a black Honda Civic whose price is $22K+ in the market. He must have bought other branded vehicles since then.

Likewise, the talented actor has shown interest in fashion. He often wears clothes from Reebok, Ksubi, Bianca Chandon, etc. In addition, he has been featured on many magazine covers and walked on runways.

Hence, the Hollywood star must be enjoying a comfortable life. We wish him more success in the upcoming days.