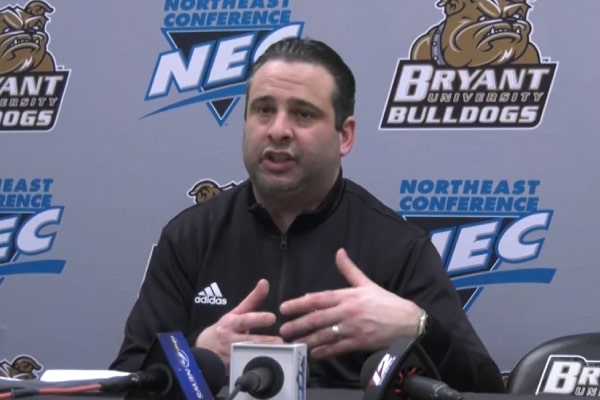 Jared Keith Grasso, shortly, Jared Grasso has been serving as the head coach of Bryant University‘s MBB team, Bryant Bulldogs, since 2018. He is one of the most skillful coaches in the college basketball league. The 2022 NEC Coach of the Year has been involved in the league since 1998. Immediately after ending his playing career in 2002, Jared started coaching.

Since then, the New York native has served several teams as an assistant coach. He also worked as an associate and interim head coach for Iona Gaels and Fordham Rams. During his long career, the coach must have garnered a lot of fame and fortune. Thus, today let’s learn about Jared Grasso’s net worth and income.

To understand how Jared landed such a prestigious position, we need to first go a little back into his career beginning. Well, Grasso grew up in the gym watching his father’s teams practice and going to their games. In an interview with Muse by Clio, he said basketball is his family business. Thus, it’s evident that the former player has been passionate about sports since he was a little boy.

The head coach had an outstanding playing career at Quinnipiac University‘s men’s basketball team, Quinnipiac Bobcats. He ranked fifth all-time in assists and fourth all-time in three-point field goals. Moreover, the talented athlete graduated as the university’s second 1000-point scorer in the Division I era in 2002. Not only that, he was also inducted into Quinnipiac’s Athletics Hall of Fame in 2014.

Thanks to his playing career, Grasso developed a strong foothold in the sports sector. He must have also earned considerably during that period. Apart from being one of the talented players, the New York native has also demonstrated to be an outstanding coach. Thus, he must earn a hefty sum from his job. Let’s explore more about his earning sources.

Earnings As The Head Coach

Immediately after graduating from the university, the Quinnipiac alumnus began his coaching career. Hofstra University in Hempstead first hired him as an assistant coach for their MBB team, Hofstra Pride. Afterward, the former athlete worked in the same position on four other teams, including Harford, Quinnipiac, Fordham, and Iona.

Finally, after serving eight seasons as an associate head coach of Iona Gaels, Jared landed his first head coaching position, i.e., his current job, on 2 April 2018. Moreover, the coach led his team to their first-ever NEC Championship in 2022. Furthermore, for Bryant Bulldogs, the 2022 season has been incredible as they won 22 games, the regular season, and the conference tournament title.

The Bryant Bulldogs are going dancing! 🐶🕺

In the first week of April 2022, Bryant announced a contract extension for the head coach through the 2026-27 season. However, the exact salary and contract details have not been disclosed to the public. Regardless, there is no doubt that Jared Grasso’s salary must have increased drastically. As per ZipRecruiter, the average pay for a head coach is $46,188 a year. Thus, Jared is likely earning around that range.

Nonetheless, Jared Grasso’s net worth is estimated to be a significant sum. Hopefully, the talented basketball professional will continue to earn more money in the coming days.

As already mentioned, Jared Grasso’s net worth and salary are of considerable amount. Therefore, he must be living well with his beautiful wife, Andrea Grasso, and their three kids. Although the Bryant head coach has preferred not to disclose precise information, it is safe for us to say that he lives a comfortable lifestyle.

Additionally, Grasso must have bought some real estate properties, houses, and cars with his massive fortune. Also, he must be raising his two sons and one daughter by fulfilling all of their needs without any worries.

Nonetheless, Jared Grasso and his family are living a cozy life thanks to his enormous riches. His career is flourishing, and he seems to be leading the Bulldogs in to correct direction. We wish the talented coach a more prosperous life ahead.